Having a early medieval drinking horn terminal / finial in my collection already, I was extremely happy to encounter another one!

This example is - likely - of Anglo-Saxon origin and is a lot smaller than the other example. It measures 58 mms and is only 15.68 grams. Cast in bronze its - sparse - decoration shows us a bird heads, possibly a reven. Found in Norfolk in the 1980-ies, in middle-Harling, it is known  area of Viking occupation. It would have belonged to a small drinking horn, considered its size. The piercing holes on both sides of the top are an aspect wich cannot be seen at the other drinking horn finial.

Having showed it to Carol de Neuman-Vegvar - who is examining early mediëval drinking horn finials - she responded:

'Your terminal is almost a twin of another found in Norfolk at Ormsby St. Margaret by Scratby, which is closer to the Norfolk coast, north of Great Yarmouth, now Norfolk Castle Museum and Art Gallery; the contact person is Dr Tim Pestell, Senior Curator of Archaeology, whom I am copying on this e-mail.

I attach a photo of the Ormsby terminal. The Ormsby terminal is unusual in having a squarish socket, Your images of your terminal are in lateral profile only so I cannot see if the terminal is similarly squarish. The dimensions of the two terminals are almost exactly the same (58 mm in length), although slightly differently proportioned, and it would be particularly wonderful if they turned out to be from a pair of horns. In recording the find in 1999, Helen Geake said she considered the Ormesby terminal probably Anglo-Saxon, seventh-century. Typical of that period is the flattened beak with strong undercurl, which in these two terminals may have held a loop for attachment of a suspension chain or cord.' 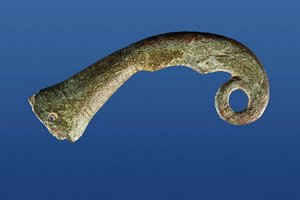