Extremely rare. Just five other examples known to me. ('Mammen style decoration is rare in Britain and this brooch is only one of two rectangular brooches known in England, the other two being from West Stow Heath, Suffolk and Bergh Apton Norfolk').

Addition to Jane Kershaw's reference: the third example - see for reference the link to the PAS reference was found in the region of the East Midlands, County or Unitary in  Lincolnshire, district West Lindsey, parish or ward: Linwood.

Executed in the (rarely found in England !) Mammen style, it can be dated to the mid to late 10th century.

Though not find myself and an exact findspot unknown to me, I have recorded it to the Portable Antique Scheme, see:

'Unique for Scandinavian-style ornamental metalwork in England, the brooches depict a Mammen-style bird.... the bird has an arched neck and forward-bent head with round eye and open jaw, together with a double-contoured head lappet; this arhes downwards into interlace with its body and wings before terminating in an open-ended tendril. The wings, represented by a pair of double tendrils, extend diagonally downwards to the bottom left corner and pass behind a similarly constructed tail, extended diagonally upwards. The bird's raised leg, with bent foot, is also visible. This treatment, particularly the movement and open-ended tendril terminal of the head lappet and the use of the tendril ornament to depict the bird's wings and tail, identify the bird with the Mammen style.

Yet whereas the brooch motif is influenced by Scandinavian art styles, its rectangular shape is not Scandinavian in origin. The brooch shape would instead appear to relate to to rectangular and suare brooches found predominantly in northern Germany and the Netherlands: so-called Rechteckfibeln..Square-headed brooches are dated on the Continent to the 10th century, a date wich accords with the appaerance of the Mammen--style in Scandinavia' 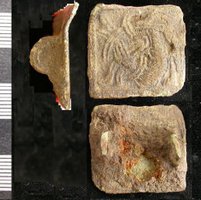 The Portable Antiques Scheme addresses three other examples of this specific kind of brooch.  The first one - wich had been returned to the collector one can see above. Information in detail can be found via this link to the object in the PAS website:

Two other examples of this kind of brooch are in the Ashmolean Museum in Oxford. 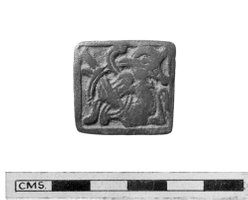 © Ashmolean Museum, University of Oxford (images front and back hereunder). 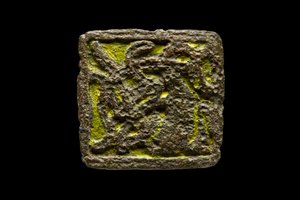 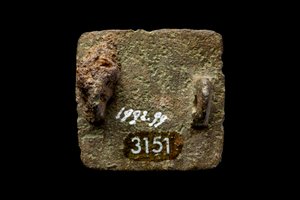 The document beneath is the inventory of the Ashmolean Museum of the two brooches (wich are on display). Remarkably they state that: 'only one AN1909.425 ‘is identified as ‘Jellinge’ style, a rare Anglo-Danish design not commonly found in England’.

As the use of 'Anglo-Danish' may be the case being used in inventory registers in English musea, I prefer the term 'Anglo-Scandinavian, as considering Jane Kershaw's remarks, it is very likely that they were produced within the Danelaw, the area where at least 3 and presumably also my example was being found.

As Jane Kershaw categorize this type of brooch as 'Mammen style' I underscribe that typification (also).

Out of the blue, a fifth (perforated) example popped up on Ebay in January 2015..

The description on Ebay said that it was found in Cambridgeshire.

The buyer made an interesting blog wich can be read here: 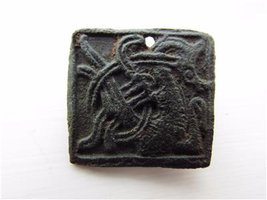 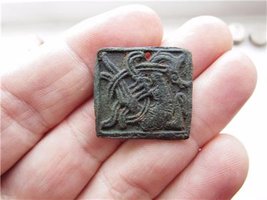 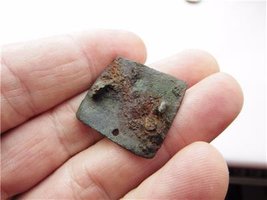 October 2020  I got an email that a sixth example was found on a field in Suffolk, England. Full gilded on the front it is a remarkable find, standing on its own compared with the previous known examples. It would be worthwile to examine if these kind of brooches, exclusively as it seems, being found in England, also had been found in other countries/areas. For now it seems they have been produced locally somewhere in England. 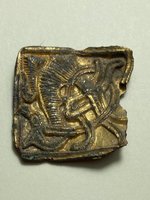 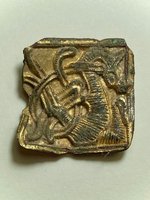 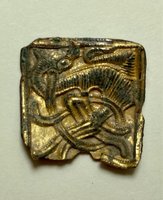 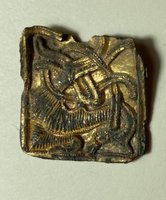 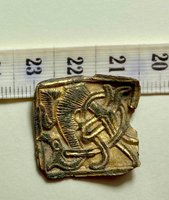 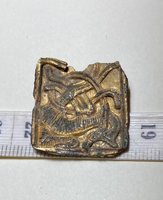 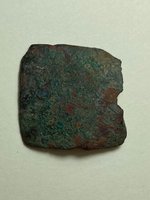 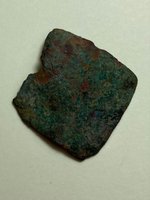