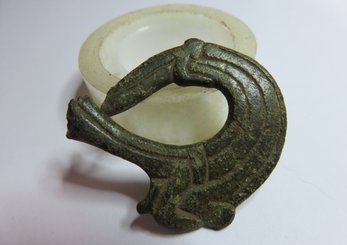 A remarkable bronze (part) of a presumably horse cheek piece in Anglo-Scandinavian style. Although a partifact, its appeal lies in the distinct Anglo-Scandinavian version of the Ringerike style. Both seller and David Mullaly are suggesting that the head depicted on the terminal is of a raven. It could be, as this artifact is showing us some 'hidden faces' and animals depicted this way tend to seemingly 'dissapear' in the design and are depicted in a artistically 'free' design. The form of the (p)artifact suggests it had been part of a horse cheek piece, although this isn't 100% sure.

When the object is rotated another hidden animal pops up in the form of a head of a dog (or wolf?). In all its eemingly simplicity, the design is of high quality and very appealing. It was found in Yorkshire, near to York and smaller similar items had been found in that area. A puzzling item from the Anglo-Scandinavian area from the Viking Age! 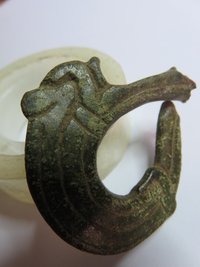 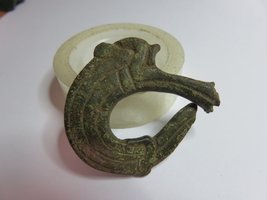 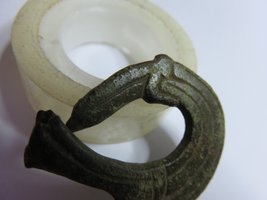