By about 1035 AD the coinage minted in Dublin had degraded to a point where it is likely that it was only being produced for internal use within Ireland as it had fallen below the standards used in any neighbouring regions. The coins are smaller and of poorer silver, they have legends made up of strokes and symbols rather than lettering, the symbol of the human hand appears on many coins in one or more commonly two quarters of the reverse cross.

The native Irish had no culture of coinage and their experience with the brief earlier issues was clearly insufficient to enable them to continue minting to a high standard following the transfer of power from the Dublin Vikings to the native Irish chieftains and High Kings.

This phase of Hiberno Norse coinage continued until about 1060 AD.

Hiberno-Norse coins were first produced in Dublin in about 997 AD under the authority of King Sitric Silkbeard. The first coins were local copies of the issues of Aethelred II of England of England, and as the Anglo-Saxon coinage of the period changed its design every six years, the coinage of Sitric followed this pattern.

Following the Battle of Clontarf in 1014 AD the Hiberno-Norse coinage ceased following this pattern and reverted to one of its earlier designs—the so-called 'long cross' type. Coins of this general design (with occasional new designs incorporated briefly from other English and European issues) were struck in decreasing quality over a period of more than 100 years. By the end of the series the coins had become illegible and debased, and were too thin to serve for practical commerce.

All the coins produced were the penny denomination. They were initially produced at the penny standard (i.e. one pennyweight or 1/240th of a pound of silver) but the later pieces are both debased and lightweight.

I bought this one many years ago on Ebay for a very suitable price. Although struck in two, it doen't infect the value of this (though the more common type under the Hiberno-Norse coinage) penny. In the viking age, coins were split in two, more than once, using it as a part of weight (hack silver), or just "as a half penny". As there were no half penny's, they splitted them into two.

Sigtrygg II Silkbeard Olafsson (also Sihtric, Sitric and Sitrick in Irish texts; or Sigtryg and Sigtrygg in Scandinavian texts) was a Hiberno-Norse King of Dublin (possibly AD 989–994; restored or began 995–1000; restored 1000 and abdicated 1036) of the Uí Ímair dynasty. He was caught up in the abortive Leinster revolt of 999–1000, after which he was forced to submit to the King of Munster, Brian Boru. His family also conducted a double marriage alliance with Boru, although he later realigned himself with the main leaders of the Leinster revolt of 1012–1014. He has a prominent role in the 12th-century Irish Cogadh Gaedhil re Gallaibh and the 13th century Icelandic Njal's Saga, as the main Norse leader at the Battle of Clontarf in 1014.

Sigtrygg's long reign spanned 46 years, until his abdication in 1036. During that period, his armies saw action in four of the five Irish provinces of the time. In particular, he conducted a long series of raids into territories such as Meath, Wicklow, Ulster, and perhaps even the coast of Wales. He also came into conflict with rival Norse kings, especially in Cork and Waterford.

He went on pilgrimage to Rome in 1028 and is associated with the foundation of Christ Church Cathedral in Dublin. Although Dublin underwent several reversals of fortune during his reign, on the whole trade in the city flourished. He died in 1042. 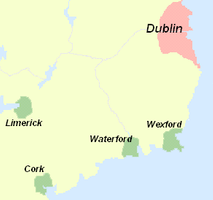 GREEN: The Viking settlements of Cork, Limerick, Waterford and Wexford

(Part of the Kingdom of Munster, under the control of Boru)

PINK: The Kingdom of Dublin, under the control of Sigtrygg