The blog of this week is written by Valentin Sustov from Russia.

Aldeigjuborg, or, in Russian, Staraya Ladoga is probably the oldest city in the northern part of Russia. It was founded near 750 B.C by Scandinavians (perhaps by Vikings from the island of Gotland) and shortly afterwards became prosperous. 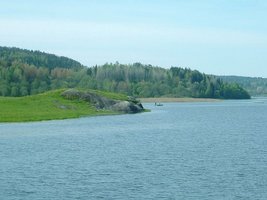 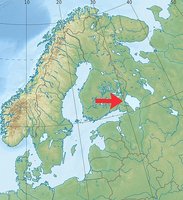 The first buildings in Aldeigjuborg, due to archaeological studies, were built at Zemlenoe settlement of the wood, which had been cut down before 753 B.C (according to tree-ring dating studies). That’s why the dating of Aldeigjuborg lies down within the limits of the middle of the 8th century B.C. The buildings were ship-repair workshops and forges. But in 2013, archaeologists found a Frankish comb of the 7th century B.C and some other founds which were dated before the year of 750 B.C. And nevertheless scholars believe, that the Aldeigjuborg was founded near 750 B.C, because these artifacts could be a simple Viking trophies, which were held in their families.

The first dwellers from Aldeigjuborg were Scandinavians - the colonists and Finns from nearby tribes. The Slavs begin to penetrate this territory in the end of 60th of the 8th century. They captured some territory from Finnish tribes and built some fortifications in the Ladoga region. These actions led to military conflict between Vikings, Slavs and Finns. In the end of 60th Slavs destroyed Aldeigjuborg and rebuilt the area in a Slavic way. The new "authorities" of Aldeigjuborg began to start up a large-scale trade. Archaeologists found the treasure of Arabic dirhams, which was dated 786 B.C.

In the beginning of the 30th of the ninth century Vikings reconquered the city and, due to controversial theory, established the state, which is customary called Rus’ Khaganate. This time period is characterized by a climax of trade. Nowadays archaeologists find beautiful Scandinavian jewelry, Greek beads, Finnish ceramics, Arab coins and rings, Khazar glass, Slavic crockery and more. But it had to end. Aldeigjuborg was destroyed again in 860-862 during the civil war between various ethnic groups, which lived in the Ladoga region.

In 862, the dwellers of Aldeigjuborg (due to chronicles they were Slavic and Finnish tribes) «invited» Rurik to rule them, because of large number of civil conflicts and decentralized authority. Rurik came to Rus’ with his brothers – Sineus and Truvor and with his own army. The future Russian ruler, Oleg (Helgi) was a member of Rurik’s inner circle. Sineus settled at Belo Ozero and Truvor at Izborsk (some archaeologists stands, that he settled in Pskov). After their deaths, Rurik became a supreme ruler of Rus’ and moved his residence to Holmgarðr (Novgorod) in 864.

On the following images some intruiging artefacts, found in this area.. 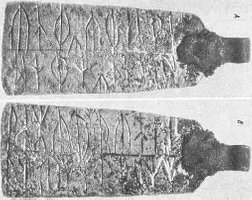 Horodyshche amulet - sketch of front and back side.

The first side consists of 4 Elder Futhark runes and one cryptography sign. The others are short-branched runes. The second side consists of Younger Futhark runes and cryptography symbols. This amulet is probably of Icelandic origin and the interpretation of the inscription is derived from Old Icelandic - Varr í fárland — is being protected [on the road] in a dangerous land or varr í farland — protected during a sea voyage", "protected" [on the road] to a distant land. Due to the last runes the owner of this amulet was "protected" by a god Týr. ﻿The second side of the amulet consist of one inscription - þarnisk þér eigi u (úrr), ﻿what it means - Yes, You will not be deprived of male power.

"Horodyshche amulet II" which has not been translated yet. 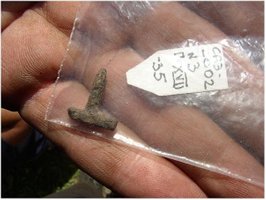 The first image is bark scroll of the 10th century with a Viking ship image on it. It was found in Ladoga-Aldeigjuborg in 1984 by A.N. Kirpichnikov. He made this photo in 1984 and published it in Russian historical magazine Nashe Nasledie (Our Heritage) in #106 of 2013 edition.

The fourth photo shows the glass beads, but who made them - its a subject of dispute (Vikings, Finns, Slavs or others). The Russian science claims their Slavic-Finnish origin.

The main source of Valentin Sustov were the works of famous Russian archaeologist A.N.Kirpichnikov

Additional note and reference of myself:

Wladyslaw Duczko, Viking Rus: Studies on the Presence of Scandinavians in Eastern Europe, 2004