Cnut the Great (Old Norse: Knútr inn ríki; c. 985 or 995 – 12 November 1035), more commonly known as Canute, was a king of Denmark, England, Norway, and parts of Sweden, together often referred to as the Anglo-Scandinavian or North Sea Empire. After the death of his heirs within a decade of his own and the Norman conquest of England in 1066, his legacy was largely lost to history. Historian Norman Cantor has made the statement that he was "the most effective king in Anglo-Saxon history", despite his not being Anglo-Saxon.

Cnut was of Danish and Slavic descent. His father was Sweyn Forkbeard, King of Denmark (which gave Cnut the patronym Sweynsson, Old Norse Sveinsson). Cnut's mother was the daughter of the first duke of the Polans, Mieszko I; her name may have been Świętosława (see: Sigrid Storråda), but the Oxford DNB article on Cnut states that her name is unknown.

As a prince of Denmark, Cnut won the throne of England in 1016 in the wake of centuries of Viking activity in northwestern Europe. His accession to the Danish throne in 1018 brought the crowns of England and Denmark together. Cnut maintained his power by uniting Danes and Englishmen under cultural bonds of wealth and custom, rather than by sheer brutality. After a decade of conflict with opponents in Scandinavia, Cnut claimed the crown of Norway in Trondheim in 1028. The Swedish city Sigtuna was held by Cnut. He had coins struck there that called him king, but there is no narrative record of his occupation.

The kingship of England lent the Danes an important link to the maritime zone between the islands of Great Britain and Ireland, where Cnut, like his father before him, had a strong interest and wielded much influence among the Gall-Ghaedhil.

Cnut's possession of England's dioceses and the continental Diocese of Denmark – with a claim laid upon it by the Holy Roman Empire's Archdiocese of Hamburg-Bremen – was a source of great leverage within the Church, gaining notable concessions from Pope Benedict VIII and his successor John XIX, such as one on the price of the pallium of his bishops. Cnut also gained concessions on the tolls his people had to pay on the way to Rome from other magnates of medieval Christendom, at the coronation of the Holy Roman Emperor. After his 1026 victory against Norway and Sweden, and on his way to Rome for this coronation, Cnut, in a letter written for the benefit of his subjects, stated himself "king of all England and Denmark and the Norwegians and of some of the Swedes".

Image beneath: the coronation of Canute 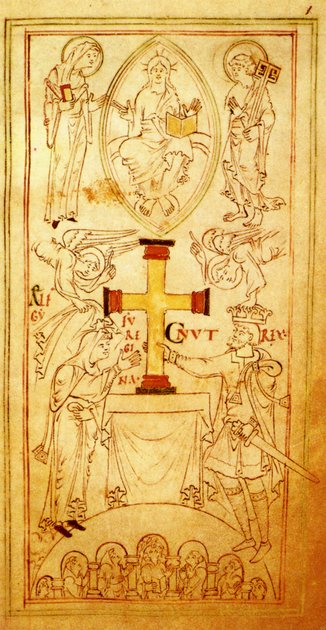