A Viking myth and a belt mount..

This week's blog is a guest blog written by David Mullaly, wich I thank him for greatly.

One of the most widely known Norse myths, which provided a cornerstone for the Vikings’ beliefs about their origins, involves the story of Sigurd, a famous hero, and Fafnir, a fearsome dragon which guarded a great treasure. Making a long story very short, Sigurd digs a pit, and when the dragon falls into it, Sigurd stabs it with his well-tested sword Gram, and kills the beast. 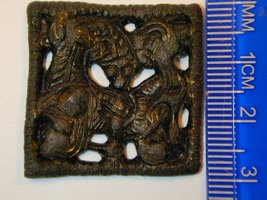 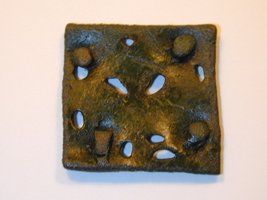 The two pictures provide a clear image of a square bronze belt mount, found in the Kievan Rus area of Eastern Europe, which shows clear traces of gilding, and the remains of four fastening posts on the reverse.  Almost all of the openwork mount is filled with the body and central head of a beast, presumably a variety of serpent or dragon. The head is identical to heads of beasts which are associated with the Borre style of Norse decoration.

In fact, the Borre style is probably the most commonly Viking style found on clearly Scandinavian items in Eastern Europe, since the Swedish Vikings who travelled east to both explore and in some cases settle did so primarily in the 9th and early 10th centuries, when the Borre style was predominant in Sweden and the rest of Scandinavia. 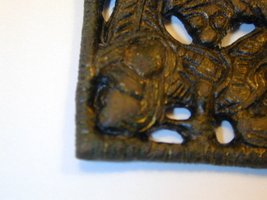 However, if you look closely at the bottom left of the square, you can see an almost circular swirl of lines surrounding what may be a human figure. Note that there are hatching lines or similar etched details covering the dragon, and the swirling lines in the corner are different. Also, if you look to the right of the figure, you see a thin horizontal element, highlighted by the open areas around it.  That element is unlike anything else in the scene, and seems to connect the human figure with a leg or foot of the beast.

I would suggest that the mount portrays the killing of the dragon Fafnir by the hero Sigurd using his named sword Gram. The horizontal element is likely the sword, and Sigurd is shown stabbing the beast with it. Although other theories are possible, this one seems to be the best fit for what we see here.

Isn’t it remarkable that a craftsman devoted so much time to the decoration on a small bronze mount like this? What may be more remarkable is that there are very few known representations from the Viking period of Sigurd and Fafnir, one of the truly seminal myths of that culture. As far as I am aware, this is the only known example of this fascinating mount.