Odin's self sacrifice as a protection for the Viking sword ?

As said some weeks ago I would return to a specific kind of sword chape.

My friend Ru Smith had aquired a similar viking sword chape last Autumn, and I think altogether our views on this sword chape, (Paulsen (1953) type B, 10th C) deserves an combined article.

As said before, Charlotte Hedenstierna-Johnson pointed out in her article, A group of Viking Age sword chapes reflecting the political geography of the time to a possible religious aspect of the image, the crucifixion.

Ru Smith is questioning that matter in his article about his example of this sword chape A Viking Sword Chape and the Hávamál Story of Odin's Self-sacrifice. Examining my sword chape with the magnifier, I did somewhat of an not too much expected discovery. As in Viking Antiques markets and auctions a lot of storytelling and 'Odinning' and depicting like Norse god This and That is going on, I was and am always cautious just believing what the seller is saying or believing himselve..

Especially when elves are being involved ;)

Then again, how could we be for sure 100%, as we have no connection with the Vikings afterlife ?

Back to the magnifier.. I noticed that one eye (left eye - that is the one on the right for you, watching the chape on the image ;) is clearly to be seen as an eye on the metal .. the other eye .. just isn't visible, not because it had abraised on the metal in some kind of way, no, because it seems to deliberately had been omitted.

On the place where you would suspect the other eye, a slightly hollow eye is visible as a well casted dent ...

As said before: we cannot 'prove' images too quickly, it is very well possible that Ru Smith's thoughts on the self sacrifice of Odin could make sence.

Then, let us just move ourselves in the heads and belief of our pagan ancestors.

Why nót depict Odin on a sword chape, to protect the carrier of the sword by giving him the wisdom of Odin in battle and remembering the sacrifice one needs in life to achieve its goals ?

My example was found about two years ago near the little town of Kreutburg, twenty miles south of Kaliningrad in that funny Russian-owned Kaliningrad Oblast area east of Poland. 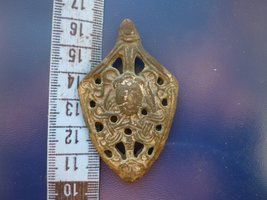 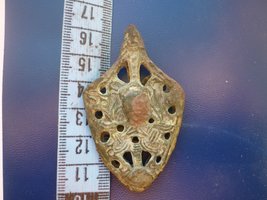 The images of the chape above shows the chape in 'just cleaned' situation.

The images of the chape beneath shows the chape, then coated with Paraloid B-72. The seller had used it with the purpose to conservate the piece. I will check on the Archaeological Services in Holland, if this was a good thing to do..

For further references to this stunning piece of Viking Art I point out to the ones given in Ru Smit's blog above..

The map shows the area the sword chape was found (south of Kaliningrad).

I have shared our thoughts with Charlotte Hedenstierna-Johnson who responded: Odin is Always a bit elusive, even as archaeological finds go...'.

And that, my Viking Age interestees and students and researchers, is the attractiviness of our part of field of research..

We do not, and cannot know everything for sure. That is the mystery, the everduring desire to investigate and deliberate ..

With thanks to Ru Smith 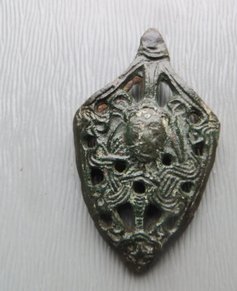 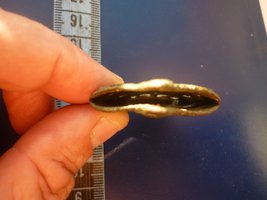 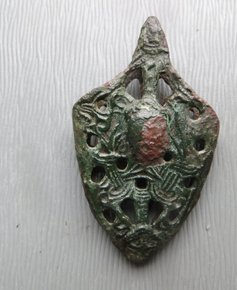 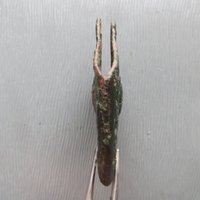 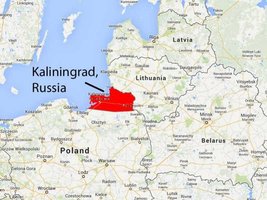