In this blog, I like to give way to an article, written by David Mullaly, author of novels about the Viking Age addicted lover of artefacts from the Viking Age, but, above all, a by me truly valued estimated specialist when it comes to knowledge of Viking Age artefacts. My ally overseas and soul mate.

Hereunder he discusses the representation of the Norse god Thor on artefacts from the Viking Age.

The Elusive Face of the Viking God Thor

The two most popular gods in the Norse pantheon were Odin and Thor, and it’s reasonable to expect that the Norse people would want to represent them in decorations on their jewelry and other items. Some artifacts decorated with images of human-like figures, the identities of some of which are unclear, provide a few clear markers for Odin.

If the face has only one eye, and the other eye is unquestionably absent, then the object was presumably intended to provide an image of Odin, the Allfather. He was willing to give up one eye in exchange for wisdom. If the human-like image includes the figures of two birds, Odin again is indicated. He was provided with two ravens, Hugin and Munin, who traveled the world to get information about whatever interested Odin. As I suggested in another commentary, The Odin Mount Revisited – The Converting Element, this supernatural being may also have been represented wearing some sort of interlaced crown or head piece.

Other artifacts featuring a realistic face of a Norse male with large round eyes have been identified as a representation of Odin, although one should take that attribution with at least a few grains of salt.

Finding images intended to represent Thor is more complicated. Of course, Thor has his hammer, called Mjölnir, as a symbol. Many examples of hammer pendants have been found over the years—in gold, silver, bronze, bone, lead. In fact, some were probably made of wood, although long-term survival was always unlikely. However, exchanges with experienced metal detectorists, and by extension with UK Finds Liaison Officers, suggest that some artifacts found with more abstract faces were intended to represent Thor. These are in some cases clearly representative of the “hidden faces” inclinations of Norse craftsmen as I have written about in The hidden face motif in Viking Age artefacts.

Example A is a bronze buckle plate with some surviving gilding, found at Pocklington, near York. A pair of flanking vertical beasts lead one to a crude face in the center surmounted by what might be seen as a pointed helmet, and the beasts become long hair next to the face. This was identified by a FLO as a face of Thor.

Example B is a lead weight or game piece with a gilded bronze insert showing an alien-looking face with an elongated neck and slanted eyes, found near York. Again, a FLO identified this as a representation of Thor. The shape of the head and long neck is similar to faces found on various Norse-Finnic tortoise brooches and other artifacts, but the eyes are very different. 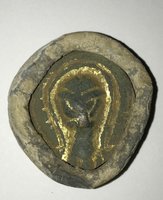 Example C is a more complex artifact. Found near Malton in the Yorkshire Wolds, it is a complete large lead strap end with a minor period repair on the back of the fastening plate. When the item is examined with the flat area at the bottom, one can see at the top a raised area which provides the shape of a winged beast, and on the outsides snake-like animals with gaping mouths about to swallow something round. When the flat fastening area is at the top—which is how the piece would normally be viewed–a clear stylized face with prominent round eyes, a nose, and a smiling mouth is visible.

Example D is a very large (63mm long) bronze strap end found near Blackpool, north of Liverpool. While the decoration is fundamentally a Borre knot chain with deep contours, there is a clear stylized face featuring a frowning expression with a prominent nose created by joined knot triangles. Below that appears to be a grimacing mouth. A typical Borre knot chain involves a deliberate symmetry, involving loops of an equal size (see the darker example), whereas this one is much larger at the top, emphasizing the asymmetrical face element. The difference is subtle, but quite visible.

In each example, the face of the being displayed is mysterious: the features are either just hinted at by a shortage of details, or obscured by stylized features which distance us from a human-like representation. Whether the Norse believers in Odin and Thor saw one as more human-like and relatable, and the other as enigmatic and less so is open to question, but that difference wouldn’t surprise me.

Note: after publishing Eadric And The Wolves: A Novel of the Danish Conquest of England and Viking Warlord: A Saga of Thorkell the Great in not too far future David Mullaly will publish his third novel: The Viking Woman of Birka.

See for latest news on David Mullaly on his Facebook page.

See for other articles written by him about Viking Age artefacts on: 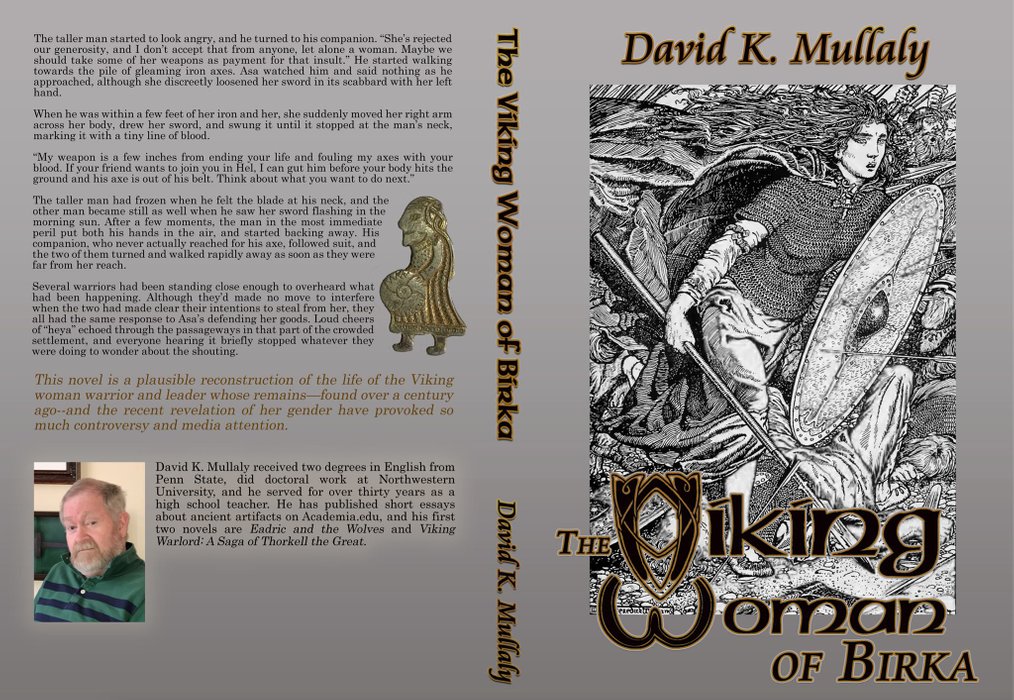