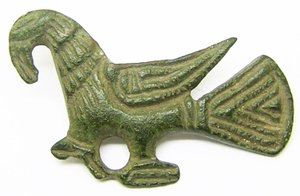 Bird brooches from the late(r) Viking era have been found in Scandinavia as wel in areas occupied and inhabited by the vikings and Norsemen within England and Anglo-Scandinavian and Anglo-Saxon context. These so called bird shaped brooches can be addressed to the 11th and even early 12th century. Stylistically the brooch here cannot be categorized towards an distinct 'Viking style' as the late Urnes style, although some types of other bird shaped brooches shows us connections to the Ringerike and Urnes style.. The decoration and form of the bird on the brooch here is more under the influence of developing Romanesque outings spreading its way from the Continent in Scandinavian art. See for example the style of a bird, depicted on the right corner next to the door portal of Rimsø Kirke, Jylland. The church dates back from 1150 A.D.

The brooch is intact with a wonderful olive-green patina. The iron pin on the back has detoriated in the ground, only traces are remaing. The - bronze - brooch measures 36 mm x 19 mm x 22 mm and weighs 5.86 grams and was found near Dereham. Norfolk, England in 2014. It is very well preserved.

Similar brooches are known from Denmark and an example of Skadegard, Bornholm - see figure 6 b on the attached page beneath - shows us a very similar form and decoration. So far England is the only area outside Scandinavia where bird brooches similar to those discovered in Denmark have been found. The archeaological finds indicate close contacts between England and Denmark in the first half of the 11th century. Anne Pedersen is suggesting that Byzantium art may be a source of inspiration for these specific type of brooches as is evident from the Danish coinage of the 11th century that direct or indirect influence from Byzanthium played an important role. The clearest link is to western Europe, an area important for the development of Danish society and the Christian church during the Viking Age. The geographical distribution of the brooches in Denmark points westwards, and an arlier brooch traditiin is evident in Germany, France and England.

The bird-shaped brooches of the 11th century represented a new type of ornament and it is likely that they served not only practical and decorative purposes but were an ornament with symbolic value. Whether the brooches represent birds of prey, doves aor another bird - a raven ? - is difficult to determine, but birds as well as other animals played an important role in Christianity. The brooches appear in the 11th century when the Christian church was advancing in Denmark. Bird motifs were common in previous centuries, but it is possible they achieved a new significance in the context of the new religion. 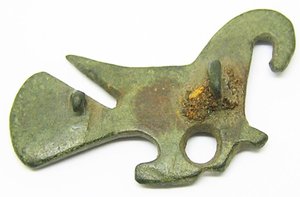 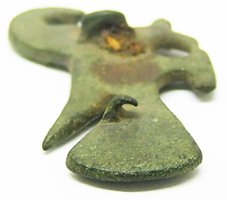 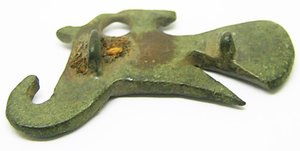 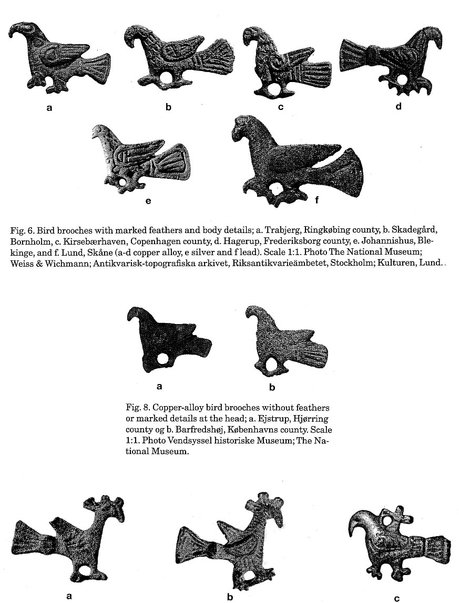