Goad element of a parade prick spur found in England from the Viking Age of possible West Slavic origin.

'It is hard to make allowances for the oddities of human figures, it is harder still to make rational judgments about the carvings of unidentifiable animals, yet without making the effort we will be continually troubled with the inconsistencies in what we make out of what we think to see'.

'.. but it is quite another matter to assume that the interpretation put upon them in their original culture would also have been carried over'

With these quotes from Rita Wood's book Paradise, the world of romanesque sculpture, I like to start off the first object of this collection of artefacts from the era of the Viking Age. Rita Wood's statements are wise ones. Of course they aren't limited to sculpture of the romanesque period, but are - very much so - needed in the back of the mind when it comes in the ever-going-on interpretation of Viking Age objects.

In 2005 a metal detectorist in the East Midlands - Leicestershire in Charnwood, England, stumbled upon a remarkable and remarkably well preserved, bronze artefact. Measuring 60 mm in lenght, 40 mm hight and 20 mm width, weighing 55.2/55.3 grams and showing a three-dimensional casted bronze sculpture. It shows a man's figure, with a (drinking) horn in his left hand on a stylised horse.

The finder showed no personal interest in it and appaerantly sold it, after had it been recorded to the Portable Antiques Scheme in England, to an antiques dealer in Belgium. After more than a decade I was able to add it finally to my collection. The PAS was determining the bronze object as the goad of a horse spur, stylistically to be linked to the Viking Age, probably the 11th century. The artefact was first published in the Searcher's Magazine. Here one embraced the possibility of it being a decorative element of a drinking horn. Perhaps unconciously given this idea by the drinking horn in one of the hands of the figure on the horse. From the 11th century, several types of horse decoration is known in England. Think as horse strap junctions, harness and stirrup mounts, harness pendants andso on. All these decorative elements had the purpose giving the owner of the horse stature and enabling him to distinguish him from one other. 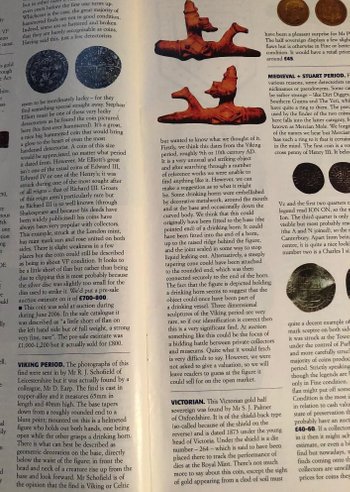 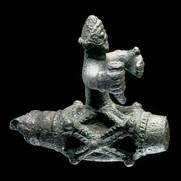 Until 2009 this object was considered as to be unique, until in 2009 in Seehausen in Sachsen-Anhalt, Germany, a similar object was being found. With this addition, that it was a fragment and a part of the horse (forefront/head) was missing. To this object the link was made to a so called 'parade spur', as became to known from a (West) Slavic context dating to the Viking Age and having been found in for example Poland. This type of horse equipment with decorative characteristics wouldn't have known a daily use, and must be considered of having been used on very special occasions. One has to think in ceremonial procedures/activities. The casual use of having been used as a goad on the spur doesn't seem very likely at first sight. The goad is casted that delicately, it would soon break or break off the spur. In Poland, very rich decorated horse spur goads have been found, in graves contexts, like in Lutomiersk. Unclear is if these spurs had been made exclusevely for the furneral, or were in use by the deceased during lifetime. Without doubt is that we are talking here about very distinguished, at the least specialized warriors who could have afforded such prestigious decorative elements or were honoured by such equipment.

In 2013, a bronze hand, holding a drinking horn was found in Groß Strömkendorf, Nordwestmecklenburg, Germany. On that occasion one meant to link these kind of objects towards made in honour of the Slavic deity Svantevit. What Odin was representating within Norse mythology, The Allfather, Svantevit was for the Slavic people. They even erected a temple for him in Arcona on the Baltic Island Rugen. He was - even today still - depicted with a drinking horn in his hand. Svantevit, though, is depicted with four heads, pointing in the four wind directions, representing this way the 'all seeing'. The rider on the goad of the parade spur is depicted one dimensionally, so a link with the Slavic main deity is unlikely. 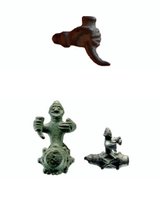 The hand fragment with drinking horn from Groß Strömkendorf - under: the Seehausen example 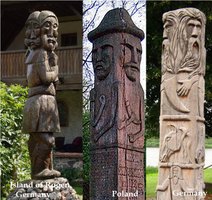 The question is, and remains thus, were are we looking at? What is depicted? The smith did not leave us his portfolio. The very limited comparison material isn't very helpful to us also. The drinking horn was symbol during the Viking Age for feasting. We can see this on one of the scenes of the Bayeux Tapestry, for example. The horse depicted isn't Scandinavian in style, so this isn't Viking. It is from the Viking Age, and as a point out a bit further, possibly used in a Viking context, interestingly !

The depicting more or less of the afterlife characer of the drinking horn we can see depicted on the so called valkery brooches, and image stones having been found in Scandinavia. The valkyrie, holding a drinking horn in her hand. What the exact meaning had been for the smith who casted the goad of the prick spur, is unknown. There is a possibilty  it had a whole other meaning for its owner in England, but this seems unlikely though not impossible entirely. Think here about the buddha, from the Viking Age, having been found in a grave context in Ireland. In the direct area of Charnwood, where this remarkable art of work was found, no other comparitive of clearifying objects have been found, wich can be linked to this goad. It can be imported from a whole other area - like the West Slavic area - by a tradesman, a traveller or a horse arrior, as had been suggested by Leszek Gardela in the light of the army of king Cnut who had several foreign soldiers in his army. A western Slavic soldier would certainly have made an impression with such horse adornment, but this collides to me with the not so ceremonial nature of ordinary warfare.

On a detail level, the example from Charnwood is varying from the Seehausen example on points of the head gear and the overall execution of the face of the rider. An X-ray of the metal will hopefully clearify if this goad has a similar iron body within where the bronze is casted around as examples known from the West Slavic area (f.e. Lutomiersk) . This would point strongly to an origin of production in the West Slavic area. This, if the Charnwood is of the same measurements as the example found in Seehausen. Polish archaeologists Leszek Gardela and Kamil Kajkowski are pointing unanimously towards a western Slavic style, nature and origin of the parade spur goad. Together with them, I will do further research. A lenghty article about this goad of a spur, connected with other (Slavic) parade spur/goads is foreseen in the future in the Archeological Journal.

So, keep following this !

Conference "Animals and Animated objects in Past Societies" organised at Muzeum Zachodniokaszubskie in Bytów, 15-17 December 2017;

Ratajczyk, Z., Gardela, L., Kajkowski K., The World on a Spur: Unravelling the Cosmology of the Pagan Slavs -   article accompanying a special exhibition at the West-Cassubian Museum in Bytów; 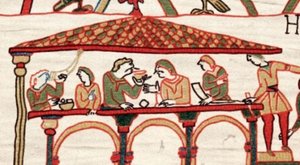