Borre National Park in Norway - and the Borre style within a lozenge brooch.

A few years ago I was travelling in Norway, more specific the area around Oslo, in search of the Viking Age monuments to be seen there. One of the things we visited was Borre National Park. We were also in a rush to be able to see the museum near the entrance of the park, to see what was to be seen of Viking Age artefacts, excavated there. Sadly, we couldn't make it before 5 PM, and as it was at the turn to March, it wasn't the summer season and the museum was closed already.

The mounds on Borre National Park dates from the Iron Age up to the Viking Age, 600 AD - 900 AD. Surprisingly just only one of the major mounds on the Borre site has been completely excavated, and this happened in 1852. From this excavation hail the marvellous Borre finds. But because of the unskilled excavation of the Ship Mound at Borre a lot of knowledge was lost. It is likely that the Borre finds were originally on a par with the ship graves at Tune and Gokstad. In the 19th century excavations often weren't of the present day standards. As far as my current knowledge goes, finds from Borre can be seen at the Viking Ship House at Bygdøy in Oslo. But.. you have to check that out ..

The majority of the artefacts exhibited stem from the Ship Mound, which was excavated in 1852. In the mound they found an imprint of a ship about 17 to 20 meters long, but no organic traces of the boat remained. The most spectacular finds in the mound consisted of gilded fittings, which would have sat on a horse’s harness, and a horse collar.

Entering Borre Park, I could just be quiet. What the pyramids must be for the Egypts, the mounds has their equal in this park. What a serene place this is. 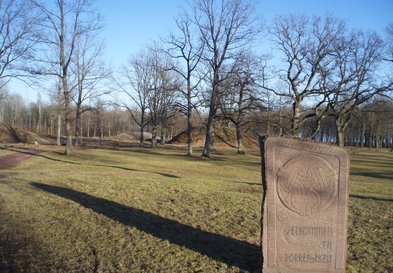 This environment is so pure. The knowing that most of the mounds had remained untouched adds to the experience. Altough just one mound had been excavated, an attempt was also made by two other mounds by examining via smaller shafts. Charcoal and burnt bones were discovered. Theory is that existing mounds were used too, by installing new graves in the 10th century.

At the time we entered the park, we were the only ones.

In Viking Age art, the Borre style is derived from the art style first recognised in a group of gilt-bronze harness mounts recovered from a ship grave in Borre mound cemetery near the village of Borre, Vestfold, Norway. Borre Style prevailed in Scandinavia from the late 9th through to the late 10th century, a timeframe supported by dendrochronological data supplied from sites with characteristically Borre Style artefacts. 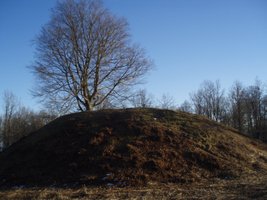 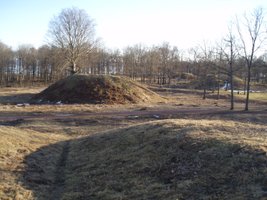 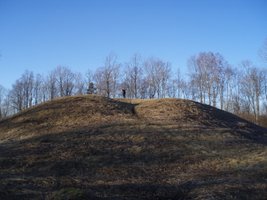 The Borre style has three main elements, the most obvious being the ring-chain motif: a two-stranded plait whose intersections are bound by a ring. Secondly there is a type of gripping beast with a ribbon body whose claws clasp the frame in which it is placed, and finally a backward-looking quadruped with spirals on its hips and a pigtail.

The Borre style is found on jewellery throughout Scandinavia and even as far away as Russia. In England, artefacts have been found with elements of the Borre style. In the so called lozenge brooch (see underlined the link to the blog I wrote about them specifically) it can be found in the four arms wich are terminating in moulded Borre style animal heads.

But not only in England, I have to say: also in England .. These types of brooches are known from Scandinavian also. Found in England, and being not sure if they were moulded in England or were brought in from Scandinavia, Jane Kershaw is calling them Scandinavian-style. The example hereunder was found in Lincolnshire, UK and was purchased by me at the end of last year. As it wasn't incorporated within the earlier blog on lozenge brooches I show it to you here.

Also see for the blog about the Borre style sword chape here.

Underneath the image of the lozenge brooch an image with a brief overview of the Viking art styles within a timeline.

Link to prior blog

Graham-Campbell J. Viking Art p. 63 - 70 especially image on p. 64 wich shows an image of the gilt bronze mounts from a horse harness found in the ship-burial from Borre; 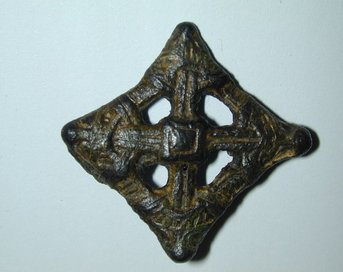 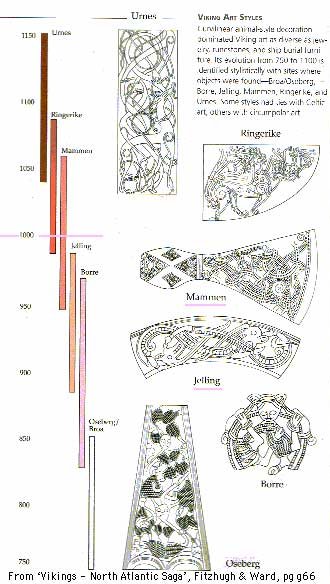