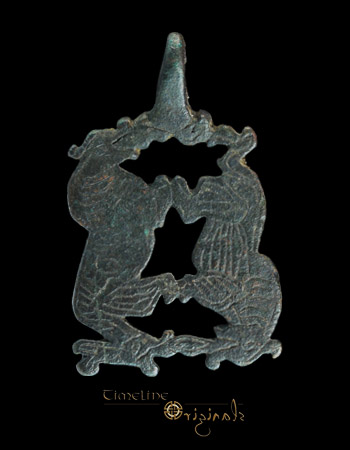 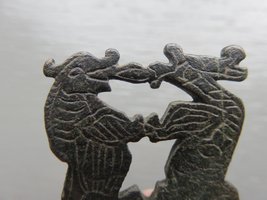 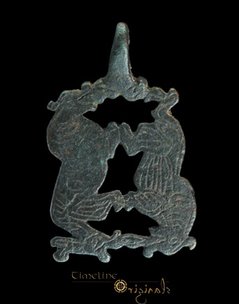 Copper-alloy, 13.77 grams, 47.51 mm. 9th-11th century AD. A cast openwork harness pendant depicting two running wolves, each placed inverted in relation to the other. The fur, shoulders and hips are defined with incised lines. Each wolf has its mouth open, with a lozengiform tongue extending. The suspension loop is placed medially above. The pendant symbolises the wolves Skoll and Hati who in the Norse myths chase the sun and moon respectively across the sky. Reference: published in British Artefacts vol. 3: Late Saxon, Late Viking and Norman, item 1.9.2-d. Very fine condition. Provenance: found Thetford, Norfolk, UK.

Harness pendants were ornaments hung from the bridles of horses and were often used to demonstrate the social status of the rider.

During the medieval period harness pendants were one of a number of objects used to communicate the importance or aspirations of the owner. As with rings and brooches, they were visible to individuals that the owner interacted with - either trying to impress or remind them of the owner's position. 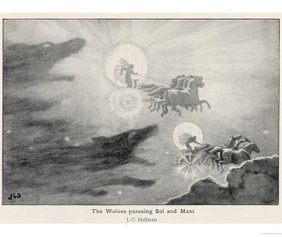 Link to the legend of Skoll and Hati

Sun liked watching waves crash on the shore, so he would hold the sun for hours close to the earth. All of that heat turned the land into a desert, and left the rest of the world dark and cold. Moon liked the sight of the deep forests, where she would tie her horses for hours on end. What's more, the animals and people, even the gods didn't know when to wake and when to sleep.

The gods in Asgard sent messengers to Sun and Moon, they offered them gifts of gold and jewels, but the children just laughed.

"We shine more brightly than gold or jewels," said Sun.

Odin even threatened them with his magic spear, but Sun and Moon knew that the gods needed them to travel across the sky. Now that they had the job, they were going to do it just the way that they wanted. Besides, if the gods attacked their chariots, they may destroy the sun and moon forever.

Loki, the god of mischief smiled as he watched Odin and the other gods rage over the work of Sun and Moon. But his smile turned to a frown when he realized where the Sun had stopped his chariot. It was right above the volcano home of Surt, the fire giant. Loki had long been plotting to sneak into Surt's mountain and steal the fire diamond, a huge and beautiful gem made of living fire. Now, with the sun always shining, the giants that guarded the mountain were always awake, and Loki couldn't sneak past them.

Loki was thinking about his problems as he walked through a forest. He was far from the Sun and the trees stretched long shadows across the ground. Loki heard a growling sound. He quickly climbed into a tree and saw a pair of wolves chasing an exhausted deer through the forest. That gave Loki an idea.

Loki knew that no ordinary wolves would do for his plan, so he traveled to the Ironwood, a land of giants and trees as strong as steel. There he found two giant wolves, Skoll and Hati.

Loki went to the forest and shot a deer with his bow. He roasted its meat with garlic and onions, and brought it to the wolves' cave.

"I have a gift for you," said Loki, giving them the meat.

The creatures gobbled the meat down in a single bite. They had never tasted cooked meat and spices before.

"More! We want more! Get us more," they growled.

"I can't help you with that, but I can tell you where to find some more meat like this," said Loki.

Loki took the wolves outside and pointed to the Sun and the Moon, sitting motionless in the sky.

"That is where you will find more meat like that," said Loki.

"Grrr what good does that do us? We can't fly," said Skoll.

"Now I can help you there," said Loki, and saying that, he took out the pouch of flying powder that he had stolen from Odin and sprinkled it on each of the wolves.

The giant wolves leapt into the sky.

And the wolves were off.

When sun and moon saw the wolves, they drove their chariots high into the sky.

But you may have noticed that at some times of the year, the Sun moves more quickly over the sky and at other times, it moves more slowly. That is because during the summer time, when the south wind blows, Skoll gets tired, and his fur feels warm, so he slows down. But When the north wind blows, and cold winds waft over the world and sky, Skoll feels stronger and chases the sun even faster than before, making out winter days much shorter than our summer days.

A derived image from Ying & Yang ?

Within light there is darkness,

but do not try to understand that darkness.

Within darkness there is light,

but do not look for that light.

Light and darkness are a pair,

Each thing has its own intrinsic value

and is related to everything else in function and position.

Ordinary life fits the absolute as a box and its lid.

The absolute works together with the relative, 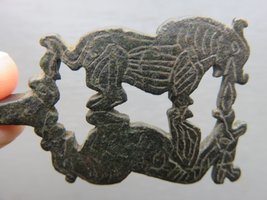 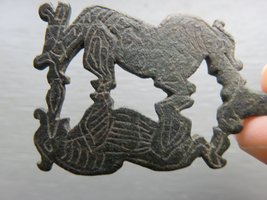