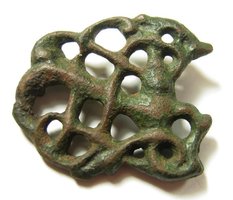 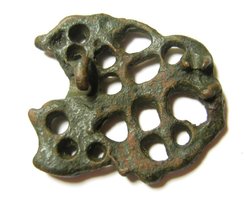 This amazing - complete - bronze viking brooch 28 mm horizontal, 22 mm vertical position, 5.76 grams - in the distinct Urnes style - second half of the 11th century, first half of the 12th century can be placed in one of the most elobarate outings in Viking art. Having been found in Lincolnshire, England, its smart way of casting and devilish detail is telling us that it was made by a Scandinavian. The interlace is puzzling and the longer one looks to it, the more 'hidden beasts' one discovers. For a start: when seen as on the image above, one can recognize a dragonlike head in the right corner above wich entwines further through the brooch, ending in a tail on the bottom. But.. one could easily discover a kind or deer wounded up in the tendrils and facing backwards. Here we are at the true nature of Viking art.It is full phantasy, devilishly thought through though by the artist wo made it. I am deliberately not using the word 'smith' as, looking at this brooch, wouldn't pay homage to him - or her! - enough. Altough cruder casted than other known Urnes style brooches from Denmark and Scandinavia, it is a rare piece of true Viking art, the type and style of object rarely being found in Engeland.

Turning the brooch 45% we can distinguish the dragon even looking like a kind of 'seemonster' seen in a horizontal position. The tail tendrils on the top right even creating an owl like face, creating the two eyes of the owl. Leaning on the jaw of the 'drake' one can use its imagination even further and see the face of a bird, possibly a raven. Turning it another 45% - image 3 - the 'owl face' outlining on the outside becomes a sortalike horse-head-shaped contour. The tail of the snake here seen as a tendril of a plant, wich is both a characteristic of the (late) Urnes and Urnes-Romanesque style. Because of the alignment of the pin lugs and catchplate, the weaer would typically have worn the brooch with the beast snout in the upper right part of the item (with the pin horizontal), but obviously it could be viewed and worn from different directions. Regardless the position looked upon this brooch, the smartness and proportions very much shows to be thought through from every inch and angle. There is no such thing as 'the right side up or down'so it seems. From every angle this brooch is appealing and it almost looks like one has 4 brooches for the prize of 1!

Turning the brooch a final time 45% artificially it seems the animal show calms down and draws to a close. But is it? The owl face hangs in wonder on a tendril, forming a sea horse when one uses some imagination. The head of the dragon - or deer - in this position seems to form another face - the one of a fox or a bat with snout and pointed ears.

Some scholars believe that this type of image - like the famous carving on the North Portal of the Urnes Stave Church at Ornes in Vestvold, Norway - represents Christian man entangled in the evil and sins of the world. Other suggest that it reflects the chaos of Ragnarok, The Norse end of the world.

From every angle, this Urnes style brooch is standing up to all of his silver and bronze Scandinavian examples. A true masterpiece on its own.

Owen, O. The strange beast that is the English Urnes style (2001)

and: An Anglo Scandinavian bronze mount in the form of a human head in Urnes style 11th century A band of brothers 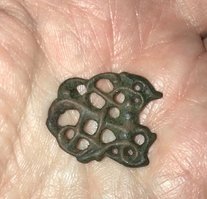 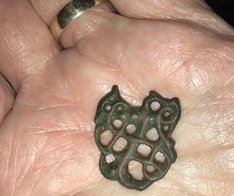 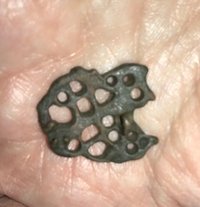 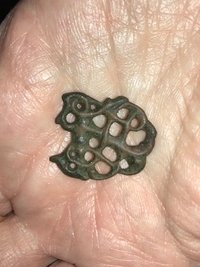 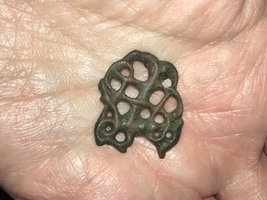