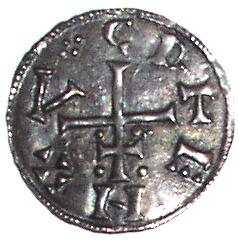 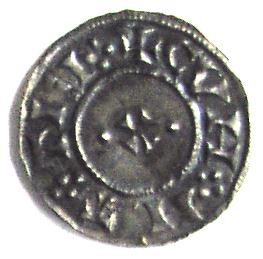 The king's name, CNVT - Cnut, is written in such a form that you make the sign of the cross when you read it, as in a blessing - up, down, left, right - and between these letters is the word REX ('king').

In the centre is a large and elaborate 'patriarchal' cross that had special meaning for the Church. On the other side, the inscription reads MIRABIL[I]A FECIT, which is Latin for 'He has done wonderful things' - a quotation from Psalm 98, v.1.

The Viking kingdom of York

The Scandinavian micel here ('great army') arrived in England in 865 and for years it moved from one region to another attacking, stealing and even conquering. The Viking kingdom of York was established in 876 by Halfdan, one of the leaders of the army.

The coinage is one of the few sources of evidence which have survived about the kingdom. It is surprising to find that some of Halfdan's successors in the late 890s and early 900s were producing a large coinage that was more overtly Christian than any other in Europe at that time.

The Christian and Viking imagery on the coinage

The Christian symbolism on this and other York issues of the period shows that the new Scandinavian kingdom not only adopted Christianity towards the end of the 9th century, but saw it as politically correct to publicise it.

They wanted to demonstrate to their Anglo-Saxon, Carolingian and Celtic neighbours that they possessed qualities which would link them to the block of civilised Western states.

In the 920s, faced with the threat of reconquest by the Anglo-Saxons, the Viking kings of York saw a resurgence of Norse nationalism when symbols such as Thor's hammer and ravens with spread wings appeared on the coins.

A dual economy existed in Danelaw which typified the blending of Anglo-Saxon and Scandinavian cultures characteristic of the region.

Despite the sophistication of the York coinages, the traditional 'bullion' economy survived in the Scandinavian community. For some purposes transactions were conducted with silver weighed out, rather than using coins at their face value.

So we find hoards containing a mixture of Viking coins, foreign coins such as Islamic dirhems brought across Russia and Scandinavia, and 'hack-silver' - cut pieces of silver plate and ornaments. 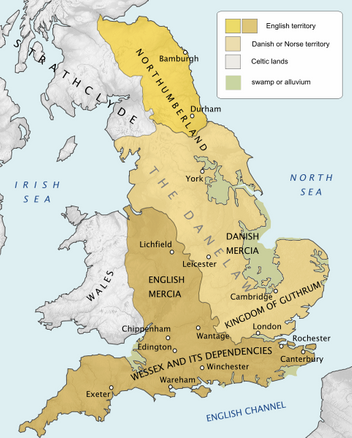 Also see link to info on the Danelaw area

A lot of these type of coins where found in the so called Cuerdale hoard, see link