A cycling tour and an first overlooked gem of Romanesque art in Drenthe, the Netherlands..

Advancing insight make us notice the beauty around. Often, at places one would not expect  by far..

Two trips conducted the way, wich eventually ended up at a church at Vries, in the Provence of Drenthe, in the northeast of the Netherlands..

In August 2015 we were making a cycling trip to the so called Scandinavian Village  - a holiday resort - just beneath the city of Groningen by the lake nearby Paterswolde. During the cycling towards there, we passed through a little place called Vries. We ate a snack, I noticed the church, made a quick snapshot and we moved on.. 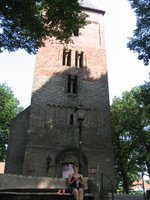 October 2015 we travelled to Cumbria to visit  all things 'Viking'. But we visited other churches from other era's too and so it came that we ended up at St. Bees Priory at the (see blog) in Romanesque decorated gate of the Norman church there. I was sold at once. Architectural - situated just after the Viking Age and before the Gothic style - it has the same often very pure, not bombastic art  style wich attracts me in the art of the Viking Age. Often, and this is certainly the case in the early phase of Romanesque art, the depiction of floral and plant motifs and the depiction of human-animal faces or animals are still connected to that Viking Age.

So.. Norman churches, Romanesque art. But in the Netherlands? I had no clue, not at all.

This Summer, we moved from the west of the Netherlands, to the east, to Zwolle. We were searching for some decoration on the wall of the living and sleeping room, and.. ended up in Vries once again in the workplace of Erik van Ommen, a national known painter and designer of birds. Again, I was attracted to the church, inspecting it now more thoroughly at the doorway of the church. I was stunned. I had never seen such a church before in the Netherlands. We moved on with a painting and a drawing, but I had to go back and study it up close and personal.. 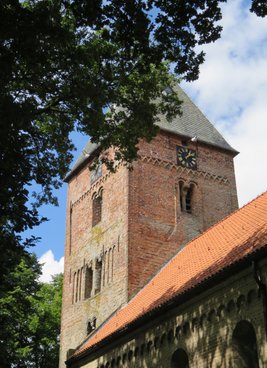 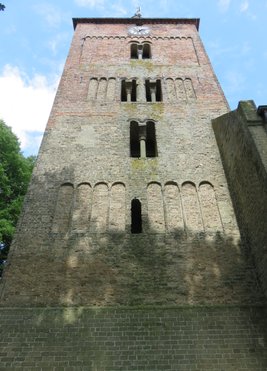 Imaging, watching the small open windows - still without glass in the 11th century, wich would be a novelty in the later Romanesque period of the 12th century, how dark the church must have been. Just being enlightened with candles, with repentence as goal, but also a feeling of safety, stillness. 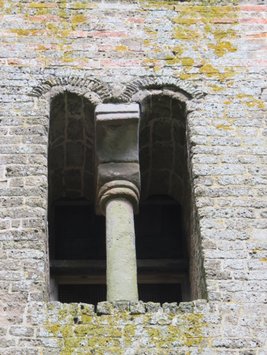 On top of the bell windows we see another characteristic of Romanesque art: the chevron ornament in a most simplistic way. Far removed from the - later - ornamental Romanesque style. Or having been executed on purpose as there may have been not enough money to do otherwise. But in my opinion, this plain and simple Romanesque ornament witnesses for its early date at the end of the 11th century.

The same can be told about the doorway. Unmistakingly executed in the Romanesque style, with charateristics as the chevron ornament and the step by step sinking doorway. As a sort of inviting feature.

Without noticing it was Sunday, we drove to Vries once again, the sun finally breaking through after a week of dull and gloomy weather. On the image right we see the 11th century tower, wich is the oldest part of the church. Though partly rebuilded in 1769 due to frailty, all ornament and arcading bell freese windows and blind arcading parts remained intact thanks to a preserver who must had had historical knowledge of the importantance of this specific church.

How lucky we were it was Sunday and the church was open! But first I examined the outer parts of the tower and nave. 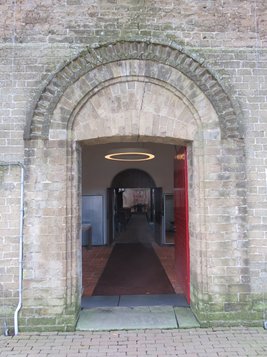 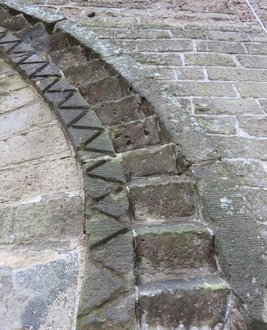 Detail of chevron and sawtooth ornament at the doorway.

Humans will always research things and it is thanks to Rev. Klumper he had noticed and asked himself why there were 37 toothings above the doorway. Why the number 37 specifically, he asked himself. This isn't a coïncidence. In our thoughts we must travel back to the day and age this structure was build. When one was building these thick Romanesque walls, it wasn't just for the purpose of supporting the vaults. At the same time they expressed the defence to the outside evil world. Literally and spiritual. Notice the shooting holes/windows on the first floor of the bell tower. They were build for that purpose and meant to function this way. In Romanesque art the evil world outside was depicted with rich ornament and anthropomorphised details under the capitals. Floral motives and (intertwined) beats were all part of this image.

Because of lack of money at the small village of Vries, these ornamental and bombastic  features are lacking here. To depict an alternative element of defence against evil, , number symbolism was being used wich the congrerationers could and would have understand.

Apart from the 37 toothings, on the south wall  there are 18 arcades and on the north wall 19. Both make the same number of 37. The 18 arcades are symbolism voor Light! Life! the Sun! The Good! en right from the entrance. The right is the Good Side, because from the right side of Christ his redeeming blood fled. The 19 arches symbolizes Darkness! Death! the Moon! the Evil! Not much good came from the North, as the prior Viking Era had shown.

The dessert of our trip revealed when we entered the church and walked through the nave to the back. 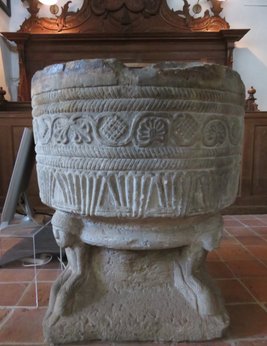 Please allow me  to consider this as a Holy Grail  of  never  expected  example of Romanesque art in the Netherlands.  Where was this made  anyway?  The  brochure  gave clearity. In the  early Middle Ages  there was a sandstone quarry just  over the border in nearby Bentheim in Germany.  At the same place these fonts were being made and sold to Hanseatic cities as Zwolle and Deventer. But of course, at the date of production, these cities weren't called that way yet. So, a reverent from Vries bought this font, transported it, until Meppel over water, but then behind that point it must have been transported on horse and carriage..

Bentheim  had produced  a lot of fonts, the 26 fonts found in the Netherlands are witness of that. 75 fonts are known fro East-Frisia, Schleswig-Holstein, Oldenburg and Westfalen. Most of them still in situ and in use for christening.. 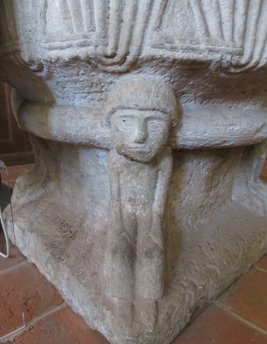 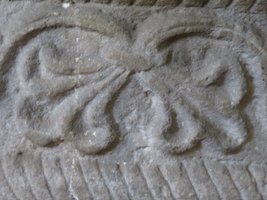 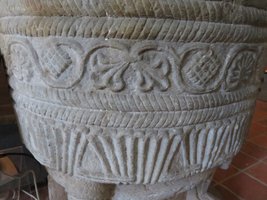 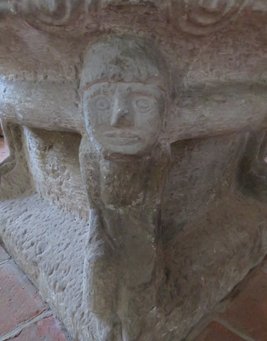 The font is typical Romanesque,: not profound ornamental, but 'honest'' in its execution. Like all ornaments  in the Romanesque parts of the church. The cupa has several ornaments  in rope motif, a band of wine ranks. grapes and leaves. The execution is strongly stylized but clever executed. Alongside the band beneath there are stylized Acanthius leaves ornament. This is a Greek-Roman type of motif. The fruit carrying wine grape is symbolism for the through faith in God flourishing life, wich starts at the christianisation at the font.The four  manlike figures at the feet of the font are no specific figures.  Their hand leaning on their upper legs carrying and supporting the font. Take notice of the same type of eyes  on the so called Chessmen of Lewis.  The font can be dated at the beginning - or possible a bit later - in the 12th century. It had been given free loan by the museum in Assen and that is why we can admire it 'in situ'.  In the museum of Assen, six more Romanesque fonts can be viewed. 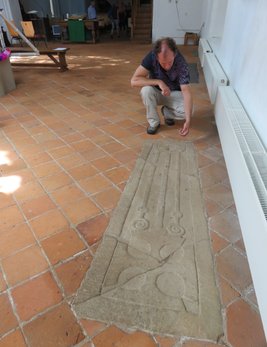 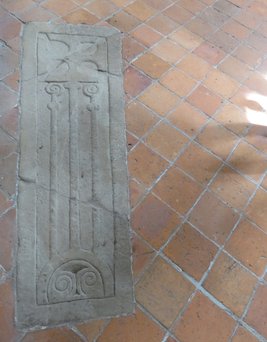 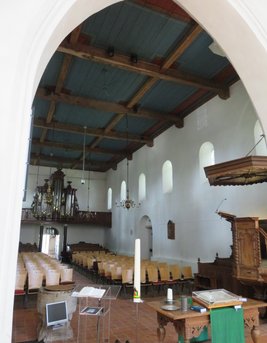 Nave of the church with font on the left forefront, seen from the choir. 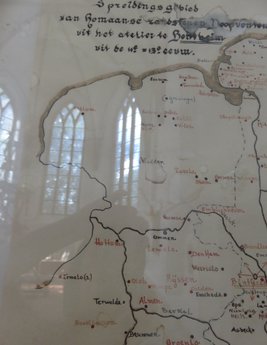 Plan with territory of Romanesque fonts from the working place of Bentheim from the 11th - 13th century. 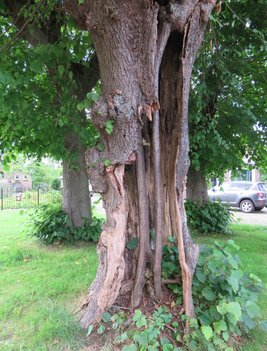 Lime tree on square in front of church.