Who isn't interested in a Thor's hammer - when it comes to Viking Age addiction ? The season of Vikings 4 had started, and being season 4, proof of our ongoing 'hunger' for the attractive world of the Viking Age when people were fighting but were free in a way nowadays we seem quite jealous of and attracted by in a strange form of way..

If one scrolls his way through Ebay, one tends to believe that Viking Age Thor's hammers are all over the place. The last 5 or 10 years one witnesses a booming of Genuine Thor's Hammers. Or.. what the seller is liking to believe or the salesman the seller the other way around. The worrying part being all those people who are bidding on what is more than obvious to be a forgery, executed in often a very 'childish' way compared with the known genuine Thor's hammers.

Even some auction houses (like Timeline Auctions) have sold Thor's hammers, apart for not having a good provenance even not accompanied with an XRF analysis. Having said that, it surprises me also that if an XRF analysis had been executed and it is mentioned at the auction catalogue, one never sees the results of this mentioned. So, how can one allow to judge the result and value of the XRF analysis being made ? Food for thought..

Over the years I have seen more than a hundred Thor's hammers passing by. I have always a direct "feel" is one could be genuine or not just by the characteristics of its decoration and the way it had been executed involved or the surface of the silver involved. But 'thinking from the outside' is not enough if one really researchs if a genuine Thor's hammer is what it says to be..

Jane Kershaw, a writer on the Viking Age and in specific researching Scandinavian jewellry found in England and investigating the silver used, had written an more than interesting blog on a Thor's hammer wich was aquired by the British Museum and turned out to be a modern age forgery. It can be read here. You can find the blog under Thursday 9 April 2015, a modern fake exposed.

Now, we must turn to a Thor's hammer I like to address here. First of all, the person who showed this hammer to me, I know as a reliable man who is sometimes jumping into conclusions when it comes to identifying another Odin in again another Viking Age artefact - but as a collector we all like to have a true pagan god in our hands, I do not blame him..

I protect him nevertheless by not mentioning his name, as bad news is always travelling faster than good, and his more than artificially knowledge of Viking Age artefacts and the metals involved doesn't need to being ridiculised in some unsuspected manner the one way or the other in this blog. My true aim of this blog is truly addressing where someone considering aquiring a Thor's hammer from the Viking Age should be cautious at. 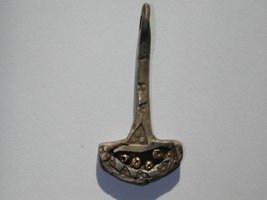 When shown to me, I was thrilled at first by this Thor's hammer. Finally an interesting looking Thor's hammer. 'A bit strange in a good way' to sum my first feelings up frankly. Unique form of execution. Clumsy ánd a piece of art. A very interesting clash in a form.. The form of the hammer being clumsy, the execution of the stamped dots and triangles far from shouting 'forgery !' at first glance. And then, of course.. the panel with golden balls. Exact foundspot not known.. that did not help..

Off the road as can be, and withstanding the feeling that just another ordinary guy had tried to make a quick modern age hammer for the market. A form wich cannot be compared with whatsoever other known Thor's hammer of the Viking Age. 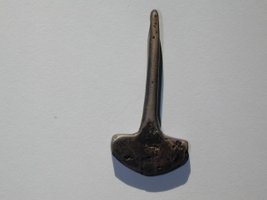 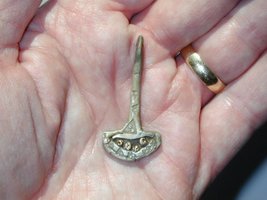 'The man who like to sell the Thor's hammer hadn't gone 'over one night ice'. An XRF analysis was executed, at the  for Advanced Life Cycle Engineering at the University of Maryland, both on the silver and the golden balls. The results being just what it says to be, as one just likes to know the proportions of materials used. But the golden question is of course: what should be in it, regardless what and why is that so ?

Sterling silver, which is what most modern silver is, is 92.5% silver, and 7.5% copper. That is an international standard.

Analysis at the British Museum revealed that the pendant was made of 93% silver, with the rest being copper.

Analysis of the hammer I address here resulted in the following proportions of metals involved:

Result of analysis - on the silver

Result of analysis - on the gold ball(s)

The result on the silver shows that the contains are pretty much the same as the ones on th example of the British Museum. The golden balls are from partly silver and cold, surprisingly being the better part being copper. Now, I do not know if that segment is unusual in the Viking Age and I should consult Jane Kershaw about this.

I also showed the hammer to dr. Kevin Leahy, National Adviser, Early Medieval Metalwork for The Portable Antiquities Scheme. Two of his reactions were:

After taking just a look at the images, unaware of the results of the XRF analysis:

'I've not seen anything like this before except in a general sense. It looks like they have used a stamp on it of the sort that we see on Gotlandish silver work.  I've not seen the recessed panel with what looks like gold granulation before, although the use of granulation is OK.  An interesting piece.'

Asking to specify his opinion for me a bit, he replied:

It is difficult to be certain just looking at images (and when handling the object) but I feel that this thing looks OK. My reasoning is that:

To make this someone would have had to have made two stamps (they look like real stamp impressions and not cast). This would involve as much work as went into making the hammer.

Forgers are not noted for their originally it not being in their interests to produces something like this that lacks a parallel.

All of the elements used to decorate this object fit into the Viking tool box.

While I am unwilling to stick my neck out and say that this is genuine I would not to reject it.

After taking a look at the images of the spots having being examined for the XRF analysis:

'Well so far so good. I am not an expert on the alloys used on Viking period metalwork and all I can say is that these don't appear to be modern alloys: the gold is not 9ct and the silver is not sterling. Looking at the microscope images I still think that this object looks OK'

'I would say that forgers rather often look to make something close enough to be convincing and yet different enough for it not to be picked out as a direct copy. The silver analysis argues against antiquity, I think. The find record and treasure number would be key in this case.' wich sounded plausible to me, too..

But - and there we go again - a find spot other than 'East England' is unknown, let alone a find record and treasure number.

Asking the salesman about specifically why he thought the hammer to be genuine, he replied, and this was before he got to know about the article of Jane Kershaw:

'First of all, keep in mind that fakers are going to use scrap metal (with likely modern components) for the fakes. They are not going to refine metals and create plausible alloy compositions—they are not that sophisticated. Now, if a faker was going make a really expensive fake, he would take an ancient silver item and melt it down to create his bogus masterpiece. ...

Silver and copper are a reasonable composition for ancient silver. Notice there are no unusual a/k/a modern metals involved.

The balls? Copper and zinc are common constituents of bronze. So the results suggest that the balls were made of bronze, coated with a thick coating of gold (with some silver in it), and it is possible some of the silver content is a bleed through from the metal underneath. 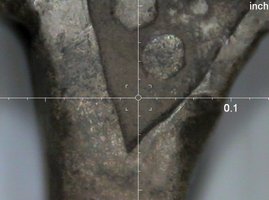 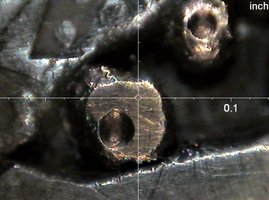 Now, rounding up.. is this Thor's hammer indeed a modern age forgery ? One tends to say yes just looking at the results of the XRF analysis executed.

But.. what about this article on gold parting ? https://en.wikipedia.org/wiki/Gold_parting

Under 'Ancient and medieval world' we read:

So.. was after all, the process of parting the gold out of silver an Viking Age practice after all ? I have adressed this question to Jane Kersh aw. Because, if it was.. how sure we can be of this Thor's hammer not being genuine after all ?