From status symbol to symbol for vanity and luxury - showing the temptation of Christ.

This article I like to take you on a trip alongside one of the distinct Viking Age attributes of noble descent, the drinking horn.

Being very rare, and within itself, being of a very rare type, I was extremely happy to be able to add this drinking horn finial to my collection. Just known to have been found in England, the salesman addressed it stylistically to the 11th century. The use of the kind of zoomorphic head in the finial resembles the casting of zoomorphic heads on stirrup finials of the 11th century.

The best/safest way to address this finial is Anglo Scandinavian from the (late) Viking Age. The long 'snout' resembles the Urnes like style of the snouts used and casted in that particular late Viking art style, but the crudiness of the way of casting makes this a hybrid Anglo Scandinavian form, as also can be recognised in other Anglo Scandinavian artefacts found in England from the 11th century (like stirrup terminals - see link).

The salesman thought the zoomorphic head to be a wolf. Stephen Pollington thought of it of being a canin. So.. zoomorphic indeed, as e sees something else in it. Only a few complete horns of the Viking Age did survive. Some more rim mounts and terminals survived but all in all these are rare items within the Viking Age artefacts segment.

The form of this drinking horn finial is definitely to be recognised already in the Anglo Saxon period. A magnificant pair of horns was excavated from the pagan burial mount of Taplow in England, dating from the 6th century. The horn found at the excavation at Sutton Hoo in 1939 adding to these early treasures of Anglo Saxon art.

A symbol of certain status..

The organisation of the symbel, based partly on the first party feasting scene in Beowulf also recalls the use of the horn. The drink should be offered in a splendid drinking horn, rather than a normal cup or beaker: horns were a status symbol at public events. Furthermore during the symbel, the circulation of the horn cannot end until the horn comes to rest. While individuals may excuse themselves and leave when they have had enough to drink, it is an act of great disrespect for any participant to lay down the drinking horn.

Viking Age mythology and tales from the Sagas have lots of references to drinking horns. Often included in the descriptions of large banquets, they also have a symbolic value as an official gesture of welcome. Think about the Valkyries, welcoming the fallen warriors with a drinking horn to Walhalla.

The famous 'Fyrkat woman' grave, contained two drinking horns. Neil S. Price has suggested that it might be the grave of a Viking sorceress, a so called völve, similar to graves in Sweden. As her grave was the richest burial in the cemetery, she must have been of considerable social standing. In Scandinavia six horns have been found in Birka in Sweden and tenty-six horns - some of them in pairs - have been found in Norway.

Two remarkable dragonheads of bronze, probably decorating the tips of two drinking horns are in the National Museum of Denmark. Both can be dated around 1050 A.D. one in very distinct Urnes style with a long elegant head.

Also in present day Ukrain a pair of (complete) drinking horns was found in the so called 'Black Grave' in the area of the Kievan-Rus.

The Bayeux tapestry depicts a banquet at Bosham with King Harold and his Anglo-Saxon peers. Two large drinking horns with mounts at rim and elobarate tips are also tokens of the high status posession and use. Finally, the great Norman font in St. Mary's church  in Burnham Deepdale is decorated with reliefs showing symbols of the farming calendar. January is symbolized by a man sitting in a chair and drinking from a large drinking horn.

Perhaps the sene is somehow reflected in the wooden calendar sticks - known from the later medieval Scandinavia - on wich the Adoration of the Magi (the 6th January) was marked with a drinking horn. 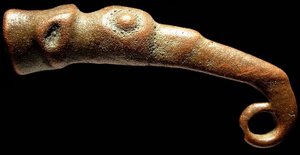 'From this horn it is thought to be well drunk if it is emptied in one drought, some men empty it in two draughts, but there is no drinker so wretched that he cannot exhaust it in three..'

From Ireland a horn terminal excavated at Carraig Aille - see images beneath - has openwork jaws wich enclose a stout ring (like mine) probably for a suspension strap. Being from the 8th century, it is some centuries older though than the A-S example. Another horn terminal from Ireland has blue inlay garnets and an - unprovenanced - drinking horn terminal decorated in the Irish/Ringerike style of Viking art with remaining glass settings and remains of silver wire inlay pays tribute to the luxurious nature of several horn terminals. The article, written by James Graham-Campbell I have attached the reference at the end of this blog.

To my knowledge, my drinking horn no other similar/similarlike  type is known, but correct me if I am wrong. 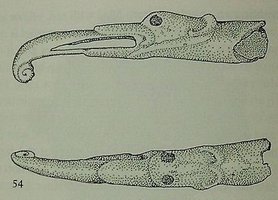 So, what went wrong for the drinking horn during the (early medieval) centuries ?

It seems to be that the christianisation was guilty of this. As these days, Islamic State has some very determinated ideas - to put it utterly mildly - of what is to be and what isn't to be anymore, the Anglo-Saxon church had their owns..

Already in 787 A.D. a synod of the Englisch church met at Chelsea, and the proceedings included a special canon about the proper behaviour of priests celebrating mass. 'We have also ruled that neither the chalice nor the paten for the offering of God should be made of oxhorn, because they are bloody'. Of course, this was double-Dutch for stigmatising the drinking horn for being of evil sin.

Drinking horns were used to illustrate a wasteful living, by the church gradually becaming a symbol of vanity and lust. An illustration in a manuscript from the end of the 9th century shows Luxuria, personified by a young woman, who is offered drinking horns by three men. The Latin text states: "Now Luxuria defeats sobriety".

The image is getting worse, though. In an Anglo-Saxon manuscript from the 11th century - the so-called Tiberius Psalter - shows a picture of the third temptation of Christ. (how many times can Christ have been tempted anyway ? whas it that tempting, and for who ? The tempter or Christ ? ;)

Just beside the figure of Satan is a drinking horn among other items, which evidently all symblozes earthly wealth and vanity.

One of the last items reflecting the high culture at court use of the drinking horn can be seen in one of the 12th century dating figures of the Lewis chessmen.

During the next 100 years the old traditions for the use of drinking horns dissapeared, but at the end of the 13th century the use was rediscovered. After all... who doens't like a drinking horn as one sees nowadays the often reproduction of early medieval drinking horns on the internet.

So, finally, what for the Anglo-Scandinavian drinking horn finial mount..

Who had been using it ? It wouldn't have been someone of lower social status.

These tantalizing questions remain in the mist...

Etting, V., The story of the drinking horn - drinking culture in Scandinavia during the Middle Ages  (2013);