This week I am a bit of proud to present you my latest acquisition ! It is the great part of a true Raven Penny !

Vikingolists know why I am thrilled ;) It seems that I have followed the same strategy as in 2004 when I acquired the hiberno-norse penny. It was only affordable to me because it was an example wich was split in two parts.

The raven penny was very high on my list on 'most wanted', but seemingly totally unaffordable, having been sold on auctions for as much as over 20.000 pounds... (see the link for the though exquisite example being sold for £21,500/ $33,000 not including buyer’s fees..

Being witness to the ever exceeding crazyness collecting the true interesting Viking Age artefacts among collectors...

Another example was sold for $ 27.500. More examples you can find easily googling on 'viking raven penny sold'.

Always having feeled somewhat of a sort of annoyed missing out on th example wich was on sale on Mike R Vosper coins see link I counted my blessings when this example came along on Timeline Auctions and gave it a try. After all.. for the true Viking Age artefacts collector, the raven penny is in his absolute top 5 of main type of artefacts (I think ;).

This raven penny I was able to get my hands on was somewhat cheaper.. Yes, it misses a part, but I was immediately attracted to it, especially as a big part of the raven was visible and the overall execution of the coin was in its sort flawless.

Even when enlarged - click on the image - the quality of the remaining part is unquestionable.

Of course one can get it even cheaper of course.. but here is the real thing .. 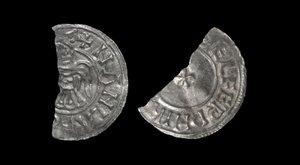 Back to the penny.. it is a true viking coin of Anlaf Guthfrithsson minted by the moneyer Aethelferd 939-941 AD.

This specific viking penny was struck in the name of the Viking King of Dublin, Anlaf Guthfrithsson who had created a kingdom around York in 939. At this time, at the end of the ninth century, much of northern and eastern central England was under the control of the Vikings. The York Viking Kingdom lasted around ten years. This archetypal Viking coin, the ‘Raven Penny’, was minted during his short rule, for he died two years later in 941.

A pagan or a Christian association - or maybe both ?

The obverse legend means ‘King Anlaf’ (Olaf) in Old Norse and is one of the earliest surviving texts in this language. It features the Viking war standard – what is believed to be a raven, or possibly an eagle as both birds were associated with the Norse god Odin. This type is one of the most remarkable coins of the Viking invaders, showing a raven or perhaps an eagle, birds associated with the god Odin. The eagle is also associated with St John the Evangelist, so there may be a pagan/Christian association that would relate to all the local population.

Anlaf Guthfrithsson was the Viking King of Dublin (Ireland) who fought in the Battle of Brunanburh in 937 alongside Constantine II and Owen I against Aethelstan, King of England. The infamous battle of the 10th Century was not a victorious campaign for Anlaf but he survived the conflict and successfully seized York and parts of the East Midlands in the aftermath of Aethelstan’s death in 939. The ‘Raven Penny’ was minted during this occupation.

The obverse legend means ‘King Anlaf’ in Old Norse and is one of the earliest surviving texts in this language. The use of Old Norse language instead of Latin coupled with the raven image, associated with the Norse god Odin, is a strong indication that the Vikings were declaring their independence in the British Isles.