The mysteries in the Viking section of the Kendal museum in Cumbria..

The last day of the visit in Cumbria I was 'desparate' to visit the museum in Kendal, being no less intruiged because of the book I have bought during the stay in Cumbria of Geoff Holder - The guide to the mysterious Lake District - Ghosts - Lake monsters - Big cats - UFO's - Miracles - Magic.

On page 113 and 114 I stumbled upon a section dedicated to the Kendal Museum in - Kendal.

'A wonderful tenth-century Hiberno-Norse stone carving of the Crucifixion, unique in England', 'a viking sword and bowl mount decorated with a tiny head' and something of a 'Sheela-na-nig' ..

now here I got really intriguid..

Entering the museum we were a bit annoyed by the announcement that some re-enactors were walking through the museum who were students and practising a certain role.. So, the visit turned out to be a very quick one. Dear Kendal Museum: spare us the theatre, we are visiting a museum because of the objects..

Of course I wanted to see the Viking section, wich turned out to be a small one, almost a bit hidden inbetween the other display vitrines with items from virtually anything else from literally anywhere..

The Hiberno-Norse stone carving turned out to be worth the visit alone. But, no specific info on this object. The disturbing fact is, that some items were described properly, others were lacking any. Take care of your Viking children, Kendal Museum ! (as always, click on the photos, and they be enlarged). 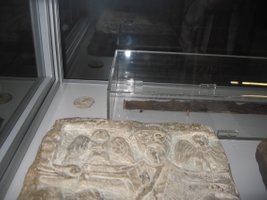 As it was the end of October and the light far from ideal, I couldn't photograph everything proper. The viking bowl mount was truly worth the visit also and described properly. A link to that object I attach here. The viking sword well.. we have seen more impressive ones..

Then we moved over to an intriguing figure head.. no description at all.. I have informed what this is.. so, I hope to be able to add this later on.. and please let us hope it isn't a beheaded member of the famous Chinese terracotta army.. 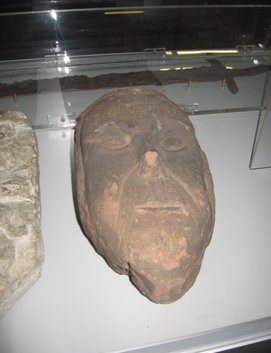 One thing is for sure.. this wasn't the Sheela na gig where I was intruiged from by Geoff Holder's little story.. As I had never had heard of something like Sheela na nigs and you tickle my curiousity about almost anything ancient easily I was dissapointed it wasn't on display. Or did I imagined Sheila a bit to much 'Sheilaish' and had I looked at her above ?

No.. I quote here the intriguing story of the Sheela na gig who you can see here (link).

As Geoff Holder is describing:

'Another interesting item on display is a Sheela-na-nig found in Pennington church. Crude in both senses of the term, the Sheela has pointed ears, a masculine-looking face, bared teeth, and angled arms pointing to a well marked vulva. Barbara Freitag's 1994 Sheela-na-gigs: Unravelling the mystery traces its history. In 1925 workmen repairing the church found it on the hidden side of a stone used for a quoin (an angle-stone). They were so shocked at the sight of it they amost destroyed the carving, but a foreman intervened. In December 1925 Canon Kenworthy reported the find in the Pennington Parish Magazine, and an account was published in A Furness Manor: Pennington and its church (1929) by A. Fell, and in the Barrow News for 14 September 1929, the latter also by Kenworthy. Kenworthy surmised that the stone had been reversed in 1826, when the church had been almost entirely rebuilt with much re-use of the original medieval stones. Freitag dug up an account by Andy Roberts, who visited Pennington in the late 1920's  and was told by an old resident that the local people had always called the sculpture Freya, a Norse godess (in a deliciously accidentally link, Freitag's surname is German for Friday, the day of the week named after Freya). The implication was that the Norse settlers in the area had been ambivalent about Christianity, and had inserted the figure of a pagan earth mother goddess into the church 'just to make sure'. This notion of Norse cultural survival is supported by an inscription in the church's tympanum, wich is written in Scandinavian runes and dated to the mid twelfth century, a period by wich most religious inscriptions elsewhere were written in Latin. In a 1983 article in the journal Folklore Richard Bailey noted that in 1979 he too was told by a resident that the local name for the carving was Freya. Bailey also discovered that despite the CWAAS having made a field-trip to Pennington, there was no mention of the Sheela in the Society's official account of the visit, or even in the comprehensive inventory of Westmorland antiquities. It was as if the respectable members of the CWAAS were embarassed by the figure and wished to forget about it. Freitag says that the sculpture was allegedly removed from the church to the museum because the Pennington parson thought that the pagan image 'might put a curse on people'. Freya was associated with fertility, and the Sheela's vulva may show signs of rubbing in; in the Earth Godess (1991) Cheryl Straffon records that at some point before 1991 the sheela was taken out and exhibited at a village festival, after wich several local woman became pregnant, including the vicar's wife.'

A lovely book by Geoff Holder and in my opinion not only phantasy and hearsay involved...

Read it on a windy evening in Autumn or Winter and you will see what I mean..

The Kendal Museum itself describes the Sheela na nig as follows:

'The carving shown below depicts a female figure with a pronounced genital area. Other figures have been discovered throughout the British Isles but their exact function is unknown, although they are thought to ward off evil.

They appear to have originated in Western France in the early 12th century as carvings of naked acrobats. The idea spread to the British Isles from the late 12th to the 15th century.'

Personally I have a bit trouble with the warding of evil issue, let alone the origin having been found in 'naked acrobats'. Why on earth would acrobats be naked in the first place .. figure.. and in the very very first place: why would naked figures be.. acrobats ? ....

'Originated in the early 12th century', would make this a very late outing of Norse sculpturing in my opinion also.

But.. I haven't studyed all the books wich appear to excist on this sheela's .. so..

'All the books ?' yes, beloved readers.. áll the books, see and be surprised..:

another intruiging blog, among other interesting blogs about English Buildings and architecture by Philip Wilkinson, on another Sheela na nig and her 'shame and blame' story, in a hidden place in a  Norman church at Kilpeck, Herefordshire, can be read here:

The final puzzling issue remains why the Sheela na nig at Kendal Museum is not on display, 'due to refurbishment' and a nameless stone head is..

Still some superstition involved in our modern 21th century.. ?

We must therefore turn our head to the curator and make an appointment..