(Late) Viking Age serpent brooch with pin and back catchplate: complete. 54 mm length from top of the pin to the tip of the snake's nose. 40 mm broadth. 18.96 grams. A large bronze brooch with the snake’s tail curling around the neck, cast grooves around the round body, and a clear face on the mounting area of the pin, maybe representing an owl, which fastens in the back of the brooch. See for comparison with the owl detail on a sword chape, also from the Ukrain (link attached). Alternatively I suggest a romanesque like face half man half animal.

Found in Novgorod, Russia, and identical to the form on a mold found near Vyshgorod, Ukraine, just north of Kiev. The mold is illustrated and described in Y. M. Lesman’s Slavic and Old Russian Art of Jewelry and Its Roots (link attached, in Russian, 2006) p. 479 as Scandinavian in form and origin. Very few examples of the brooch are known, although the same serpent element was found in the Penza district of Russia with holes on and near the head for fixing rivets and a thin fastening bracket on the other end--so used as a belt mount or a strap junction. Another example has a different hinged pin assembly. Beautiful even dark green patina.

This is the publication of a casting mould discovered in 1934 in Vyshgorod near Kiev (deposited in the NAtional History Museum of the Ukraine, inventory number B2/968). The mould made of solid limestone was used for making wax models of several metal decorations. At the first stage it was intended for casting a round pendant with a human face on the pseudo-loop (the head is backless, wholes in the side facets were used for hanging). The slot ground of the pendant is formed by the creature's neck transforming to tail. The pendant develops Scandinavian traditions of the Viking epoch, although there are no analogies in Scandinavia. The most likely date of this casting is the 2nd half of the 11th - 1st one-third of the 12th centuries. This is one of the samples of a whole group of East European objects that develop the tradition of Scandinavian animal style on the local basis, which indicates that it would be expedient to single out a special Russian-Scandinavian cultural consistent dated within the 10th - 12th centuries. 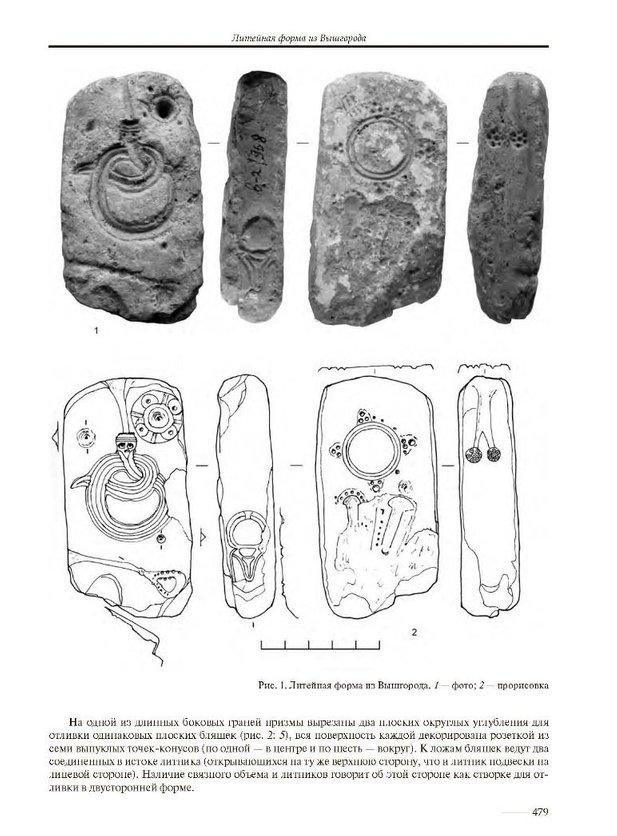 On the same time I aquired the snake brooch, a similar type snake brooch was on sale on Ebay, found in Belarus, near the Dnieper river.

That example has a few tiny differencies though. The head of the snake's decoration is less abraised, the pin of the brooch is differently attached and lacks the decoration on top of the pin; the overall look of the brooch is of a less well preserved example. Though comparison material is limited, the distribution area of these specific kind of brooch can be addressed as today 'Russia' wich encourages me to determine this type of brooch as Rus-Scandinavian. 'Made in Russia under the influence of Scandinavia in a transverse style catching up with romanesque style elements' as the depiction of the face on the pin shows. Of course, these are present day determinations, like Anglo-Scandinavian is.

Brings us to the ever questioned question: what and why is depicted what is depicted?

Well.. we can tell for sure a snake is depicted. But to call this Jormungand, as the snake in Norse mythology? And if not, what would it had represent then, as the snake is also connected to the underworld like Nidhogg (the 'Dread Biter') who coiled around one of the three roots of Yggdrasil the Tree of Life, and tried to choke or gnaw the life from it. "Here there is an evil dragon named Nidhogg that gnaws constantly at the root, striving to destroy Yggdrasil" n ancient Slavic paganism a deity by the name of Veles presided over the underworld. He is almost always portrayed as a serpent or dragon depending on the particular myth. The underworld was part of a mythical world tree. The roots of this tree (usually growing in water) were guarded by Veles (Volos) the serpent god.

My best guess is a snake was just depicted because of its form wich was appealing without deeper meaning  The curling and entwining character can be found on many artefacts from the Viking Age and early medieval age. Wearing a symbol wich represents the underworld wouldn't sound logical - set aside for the wanderer or völva...