The lion and the naughty snake..

In this blog we move from the outside graveyard of Dacre's church to the inside..

One might easily oversee gems within churches in Cumbria. Unless one had done his research and knows where to look..

There are two reminders of the Viking period within the church. These are two beautifully carved cross shafts, one dating from the 9th century, the other, larger, dating from the 10th or 11th century. The smaller, older cross fragment is carved on four sides. The best preserved of the carvings represents a winged lion with serpent head.

The larger stone was discovered amongst the rubble when the east wall was being restored in 1875 and is thought to be a thousand years old.

The larger cross is a fascinating piece of 10th century art. It stands, propped against the wall of the church, exposing a narrow set of panels, each carved with intriguing characters. The topmost panel shows a beast above two figures clasping hands. Beneath the hands is a small table. It is suggested that the figures are a reference to the Biblical story of Abraham and Isaac. Below this panel is one showing a stag with a hound on its back. This hunting theme was a common motif in the Viking period, and may also have had religious intent. The lowest panel is quite beautifully sharp and clear. It shows a large tree, with two figures beneath it. One figure is reaching up to the tree. This has been suggested as a depiction of Adam and Eve in the Garden of Eden. Whilst Adam is without clothes, Eve wears a very fetching skirt! Who wouldn't approach her.. 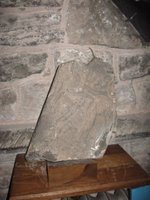 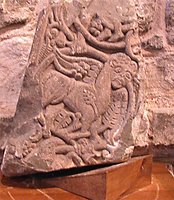 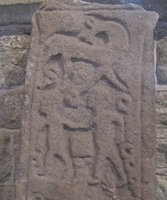 As one sees, running late in October, the light was far from ideal, when I took these photos, so beneath one the right of my photo I have attached photos of someone who was more lucky in making them.. 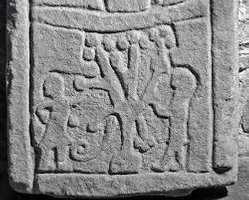 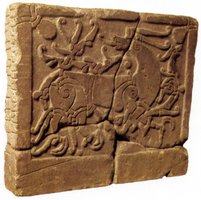 In the forthcoming blog I take you to a visit to Kendal Museum in Kendal, Cumbria with among other interesting things, an intruiging female who is pointing out quite explicitally...