This week an artefact of the Viking Age, wich have been a case of heavy debate, still going on.

Sold as a viking firesteel with Odin and his raven, Hüginn and Muninn, depicted, I was very thrilled about this addition in my collection. First of all because the image of Odin and his companying birds is so outspoken clear. If it is the image of Odin with his raven is a matter of debate within itself. Apart of being a pagan image it could as well have been a Christian alike image of the ressurrection Of Christ.

Set aside that image, the artefact itself is matter to debate. Sold as a described, a man called 'Sergei' mailed me more than uptight, making me out for somewhat of a fool..

'... firesteels (steel is a key word here) were all made out of iron of high carbon content during the entire history of mankind. The bronze and other copper alloys are not strong enough to serve the purpose. What you have is a decorative anthropomorphic (combining elements of a man and animals or birds simultaneously) pendant or a plague of Perm (Finno-Ugric tribes) animal style. Such decor pendants, plagues, clasps and belt ends served as amulets against evil spirits in medieval times..'

And indeed, as one searchs for 'Perm animal style' images, one stumbles upon an image (on the right beneath) wich depicts a similar artefact..

As one can see on the page on my website: http://travellingnorth.nl/Viking-artefacts/odin-with-raven-firesteel.html I also have some mysterious images out of a (antique ?) Russian book, addressing this kind of artefact. But not known to me until now, wich book this is.

The debate continued though, literally on the razor's edge.. 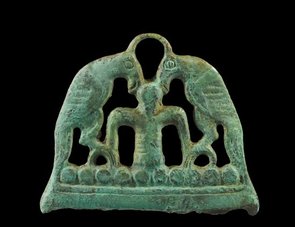 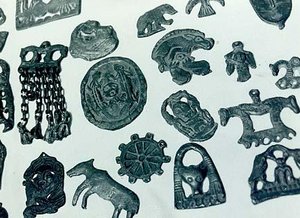 Being somewhat of the curator of my own private collection of artefacts, one needs to protect his artefacts from bronze disease andsoforth. I got in contact with someone, priorly working at the Dutch National Archaeological Services, Johan Langelaar, who also made me out for something like a fool. Again..

Well.. one thing was for sure.. this amulet wasn't going to protect me for being held for a fool ..

'Take a look at the iron on the bottom of the razor. That had detoriated, the iron part was the razor where wich one have shaved itself'.

Ok.. a firesteel, an amulet and now a shaving razor..

Of course I did my own research then.

I came across a book, written by Spiro Svoronos, 'Medieval firesteels' wich addresses an openwork artefact as a shaving razor. Right at the same time, I aquired another artefact from Timeline Originals, - see image beneath this article -  wich had been addressed as a firesteel also, but looks very much the same as the type of openwork artefact on the image out of Spiro Svorono's book about medieval firesteels. The reference given bij Timeline Originals happens to be a dissatisfying one too, as it refers to a quite different kind of firesteel type artefact (Cf. Lehtosalo-Hilander, P-L., Luistari II The Artefacts, Helsinki, 1982, fig.21.) A so called 'horse and rider' type of firesteel. (as a link to the image hereby attached).

A shaving razor also ? And of a much older date than being described as 'viking' ?

I try to get a copy of this 'Medieval firesteels' book. It seems unavailable right now.

And for one thing I have learned over the years.

To be open for other opnions, and let newly discovered opinions from someone else or by myself alter as being 'true' presented opnions (from by example from someone sells the object in the first place).

Yes, we see a man with birds. But what followed as described is as intruiging as well..

The debate goes on...

Any thoughts on this both artefacts ? Share them with me on: vikingsandartefacts@yahoo.com 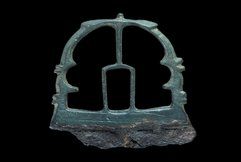 Not used in this article, but the book from

An expensive book, I'm considering buying it. Without a thorough library, a collector and curator is nowhere ! (a salesman of artefacts also !)