Notice the peckmarks on the coin.

The small gouges on the reverse of the coin are known as 'peck' marks and were made with a knife to test the purity of the silver. The Anglo-Saxons would have had no need to do this, as the bust of Æthelred on the coin was a royal guarantee of its value: this coin could be exchanged for a penny worth of goods. The Vikings, however, only saw the coin for its silver content and pecked or bent it to find out how soft, and therefore how pure it was.

See publication on Aethelred coin from the Fitzwilliam Museum

Those who are able to examine such coins may well notice a small scar or groove incised in the surface of some of them. These are known as 'peck' marks and embue such coins with some of the drama of Aethelred's reign. Vikings had the habit of digging the point of their daggers into coins to assure themselves that they were of solid silver. 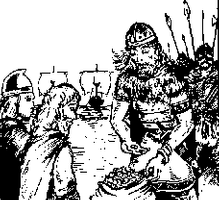