Just lately I got interested in so called Perm Animal Style artefacts. These are rare kind of artefacts  (even more rare than Viking artefacts) wich are found in the  western Siberian area of Russia where Finno-Ugric tribes lived also during the Viking Age. The artefacts shown beneath are from the Viking period. Though they are not viking, I think they are a not be missed link in my collection of artefacts from the Viking Age as the vikings defintely came in contact (and traded) with this tribe(s) living in this distinct area.

The clear animal style wich can be seen in their intriguing artefacts has a direct link in the often anamalistic style of the Scandinavian, Anglo-Scandinavian, Hiberno-Norse, and Rus Scandinavians.

The Perm Animal Style is associated with a loosely culturally connected group of people known as the Finno-Ugric peoples who lived in west central Siberia, from modern day Perm north to the Arctic Sea. They freely took artistic influence from those who came before them, like the Scytho-Siberians, and from colonists from the west, like the Vikings, but developed their own clear style that archaeologists know from graves scattered throughout the taiga. Birds of prey, ungulates like reindeer, canines, and bears abound in their iconography; human representations are also common. These zoomorphic designs seem to share some common culture with the fantastical animals of pagan Viking art, but with some major stylistic differences. Notably, like the Scythians who occupied much of this landscape before them, they tend to focus on individual elements of animals - beaks, feet, claws, mouths, and eyes. Imagining the lifestyle of people in the vast regions of the north - both in taiga and in forest - animals hardy enough to live through the dark winters would have been of great interest and probably played major roles in their folklore as well as being human companions and fellow hunters (birds of prey), food sources (reindeer), and threats (bears and wolves). This iconographic style had remarkable uniformity of design across a vast region and long time period. Although nearly all of our knowledge comes from grave goods, these items seem to have been extensively used in life based upon wear patterns (unlike some other cultures, where goods are produced solely to be placed in graves). They were probably worn on the belt of their owner in life, at a time (which continued into the medieval European period) when flashing, jingling decoration was in fashion. Today, as climate change causes the melting of the permafrost in Siberia, many of these archaeological sites are thawing (and threatened), presenting an opportunity to learn more about these elusive ancient people.

Bracelet: the artifact is an open (the ends do not lock) plate bracelet with an oval eveleopment. The ends of the rectangular plate, on the obverse, has the images of bears'heads lying between widely set apart paws. Along the symmetrical axis the heads are crossed by chains of small "pearls". The oval eyes are given as a depressed contour, one image has nostrils. Arches radiate from the bears'head wich, when they join with the smooth-edging of the plate, pass into paws, the four-toed tips of wich are seperated by half-moon depressions. The heads are flanked by short lines imitating a twisted cord. The short ends of the plate are edged. The field of the bracelet between the images of the heads is decorated with an ornament of longitudal relief elements, placed along the central axis of symmetry: zigzags, triangular in cross-section strips of various width: chains of "Pearls"; a strip imitating a twisted cord. The reserve of the plate has a clear imprint of birch texture, wich might indicate what material the model for casting was made of. X-XIth c. AD.

(Bear) pendant/amulet: the artifact is a hollow, open at the bottom, casting in the form of a stylized volumnious figure of an animal (bear?), standing on an arch-like basis. There is an opening on the back for hanging it up. The head and tail are turned down and touch the basis, thus forming a closed composition. The head is disproportionately large, with short triangular upright ears, the big round eyes and arch-like nostrils are given in the form of a depressed contour. The line of the lower jaw is accentuated by a chain "pearls" - wich isn't the case on the examples I have. The volume of the animal's body is accentuated by edges in places, to make it more effective they are encircled with a depresed contour, so is the shoulder and thighs. The paws are crossed by grooves above and below the end.

Analogies: The item belongs to a set of zoomorphic volumnious pendants that were used in the taiga zone along the banks of the Irtysh and the lower and middle reaches of the Ob in XI-XIIth c. AD.

The artefacts were found alltogether not far from the city of Turinsk, the Sverdlovsk region. 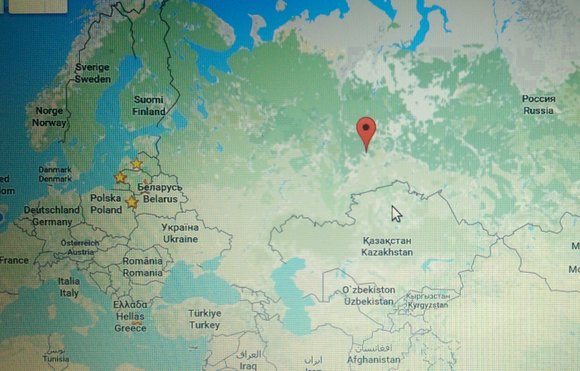 Photo: the city of Turinsk.

The name Perm is of Finno-Ugric etymology, likely of Uralic origin (Komi-Permyak: Перем, Perem; Komi: Перым, Perym). Komi is a member of the Permic group of Finno-Ugric languages, which is also named for Perm. In Finnish and Vepsian perämaa means "far-away land"; similarly, in Hungarian perem means "edge" or "verge".