Another interesting stone dating back to the Anglo-Saxon period is the so called "Tunwinni Cross" in Great Urswick, Cumbria. Dating app. 850 A.D. it has Ango-Saxon runes inscribed on it. It says at much as: 'This cross Tunwinni erected in memory of Torkbred (or Torkhtred) a monument to his son. Pray for his soul. Lyl wrought this'. The runes suggest that there was a literate early Christian community at that time.

Beneath the runes is a panel displaying two clerks, one holds a cross.

There is an argument that Urswick had been the site of a hitherto unidentified Roman fort. Following the departuree of the Romans their monastry was re-used by local people. By the late sith century it was the site of a monastry based on the model of that in use on Iona - a community of Celtic Christian monks.

Despite the dodgy light - it was late October - by enlargening the photos, some more detail might be revealed. Cumbrian churches are worthwile visiting, as this and prior blogs have shown. 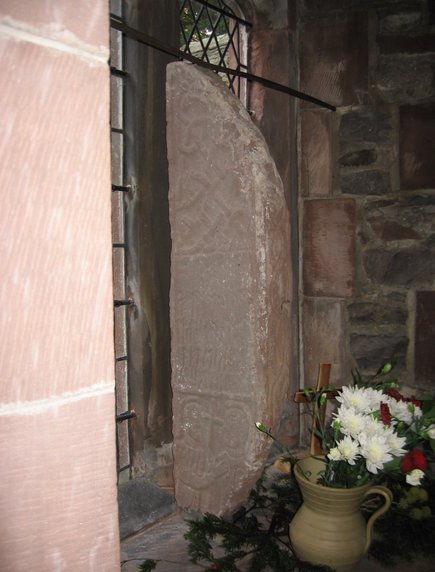 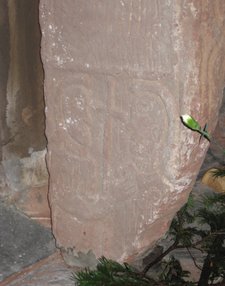 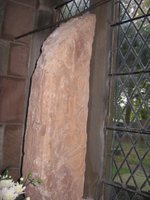 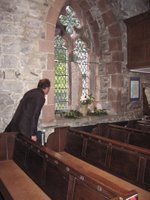 Having avoided the maybe too obvious Gosforth Cross, I hope to have given an interesting insight in the Viking Age (and Anglo-Saxon) monuments of Cumbria.

One more for the road ? Well.. then I will take you to another astonishing cross in the New Year. The Irton Cross. From here and now dear readers:

I wish you a spheric Sylvester and Happy, Healthy & Historical 2016 !