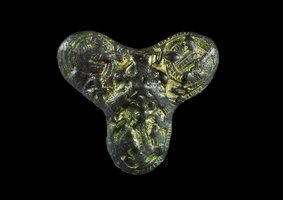 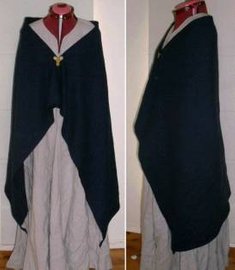 The trefoil brooch - where did it came from ?

Before going back to another part of equistarian equipment, this week I like to tell something more about a true characteristic Viking Age feature in jewellry, the trefoil brooch.

Brooches of this type were used to fasten a cloak or shawl on the breast. The form is modelled on Carolingian trefoil fittings from sword-belts of the ninth century, presumably either seized by the Vikings in raids on the Continent, or perhaps obtained peacefully through trade or the exchange of gifts. The decoration, however, uses animal rather than plant motifs, a style with which the Vikings were familiar. Simpler versions appear to have been mass-produced. Although appeared to modelled on Carolingian trefoil fittings, the trefoil model already shows up in Roman times, see here.

As one can see here the sword strap distributor in my collection is modelled in this trefoil shape, accidentally at first considered by me as a trefoil brooch (though in Iceland an example was reused as a trefoil brooch, and who can blame them ;)

The viking truly Scandinavian style trefoil brooch on the image above and just here under is - although it shows clear signs of being worn - a finely made and highly ornate gilt copper-alloy brooch. It is comprising a central circular boss and three lobed extensions.

The profile of the brooch is dished with the pin and catchplate housed beneath. The decoration comprises looped and knotted serpentine creatures in Borre/Jellinge Style surrounding a hexagonal "rosette" motif of conjoined animal heads. Most books define this kind of brooch as Borre Style.

Showing his highly ornate nature, this trefoil brooch can be addressed as Scandinavian. The trefoil brooch (just like the simpler version imaged beneath) was found in England.

Many examples (although 'many' is a relative statement here) found in England are in fragmentary condition. One the one hand because of soil conditions, when fertilizer and pesticides had been used, causing corroding of the artefacts. On the other had, and this is the case with the simpler versions, like the trefoil brooch on the right beneath corner, because of their lesser quality forthcoming out of mass production and the way they were casted. The debased ornament on these brooches make them Anglo-Scandinavian products.

A true example of the Anglo-Scandinavian Style is a clay mould for a trefoil brooch combining the Borre Style with Anglo-Saxon animal motifs, wich was found in York with pottery of the late tenth or early eleventh century.

Here an example of a very fragmentated trefoil brooch of Anglo-Scandinavian type, found near Norwich. The lobes of this type of trefoil brooch very vurnable to breakage.

Until 2008, in England,a total of 18 Scandinavian style trefoil brooches were found, and a number of 29 Anglo-Scandinavian. Because of the fragmentary condition, 26 examples remained unclassifiable, making up to a total of 73 brooches. This number making them quite a rare find, and even rarer turning up in antiquities market.

Most trefoil brooches appear in the area of Viking-Age Denmark. Numerous trefoil brooch mould fragments heve been recovered at Hedeby. 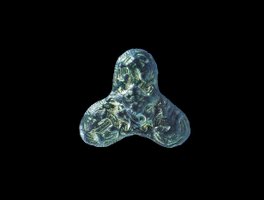 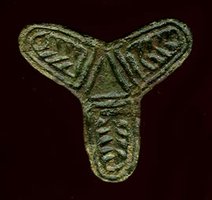 Francheski, G. - Jorn, A. and Magnus B., Bird, Beast and Man in Nordic Iron Age Art;

fig. 212 - trefoil brooch of bronze with ornaments in Borre Style.