I know that I hung on a windy tree

wounded with a spear, dedicated to Odin

on that tree of wich no man knows

from where its roots turn 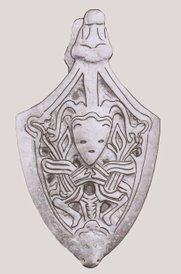 Having had the opportunity to hold a similar sword chape in hand a few years ago, I wasn't quite happy in the end by the quality of the chape in respect to the prize I had paid for it. Viking Age artefacts from good quality with a distinct Scandinavian art style decoration aren't easy too get and (very) valuable.

Sometimes in life, one gets a second chance..

It is from the 10th century and was found in the Ukrain in the Vinnitsa region. Several of this type of chapes were found in settlements (Araisa, Steigen, Birka, Hedeby, Nimschütz) rather than graves and without their swords. Charlotte Hedenstierna- Johnson notes that "the total number of known sword chapes dating from the Viking Age is extremely limited" and that their distribution differs from that of the swords. "In fact they are generally uncommon, and even though they are mainly connected with a high status weapon, the sword, this is not always the case. They also appear on their own and seem to have a meaning and value apart from being the decorative end of a scabbard."

This sword chape depicts a face within Borre style interlace/knots wich, concerning to Ru Smith, is connected to the Hávámal story of Odin's self sacrifice. He highlighted the design elements of the example he has and clearly a figure can be seen, hanging within interlaced branches with leaves. I additionally would suggest another proof of Ru Smith's theory, as on the top of the tree - Odin is hanging upside down in the tree - a face of a bird can be seen wich very much looks like an owl. As everyone knows, the owl is known for its wisdom. With its feet connected to the owl, he connects with its wisdom.

Maybe not so far stretched..

David Mullaly commented: 'I've actually read at least one commentary which suggested that the face in the center surrounded by the interlaced design is that of Jesus. The fact that much of the Borre-decorated items were made fairly early in the Viking Age would suggest that the Christianization of Scandinavia and even more so the East would have been too late to have such a prominent place on a sword scabbard like this. Odin or another Norse deity is a much likelier identification'.

According to Ambrosiani (2001) "The limited number of motifs to be found on chapes indicate that they were designed to symbolise something very particular. One possibility is that they functioned as symbols of rank or office".

In an earlier article I have suggested "Why not depict 0din on a sword chape, to protect the carrier of the sword

by giving him the wisdom of 0din in battle and remembering the sacrifice one needs in life to achieve its goals?" Of course, all these thoughts are highly speculative and remain in the Viking Age mist for over 1000 years now..

Ambrosiani, B. 2001. The Birka Falcon. Eastern Connections Part One: The Falcon Motif. Birka Studies V. B.