Viking Age sword chapes - always a bit of a mystery

In this week's blog I'd like to take you to the somewhat mysterious world of a part of the adornment of the viking sword, the sword chape.

Charlotte Hedenstierna-Jonsson wrote an very interesting article in 2002, called 'A group of Viking Age sword chapes reflecting the political geography of the time' in wich she addresses this type of artefact as 'scarce'. Written in 2002, I have asked her if - in her opinion - this is still the case nowadays.

This is the case, because there is a viral market on viking sword chapes wich hadn't been documented at musea etc. The two sword chapes published here, are an example of that market. Of course, just for the sake of this overall overview of excisting sword chapes, I recommend each serious collector always to get the provenance of a sword chape. Generally, in my opinion, it doesn't matter if an artefact is in private collection hands, but the private collector has to do his utmost efford to get to know and register the provenance of an artefact for future's sake. 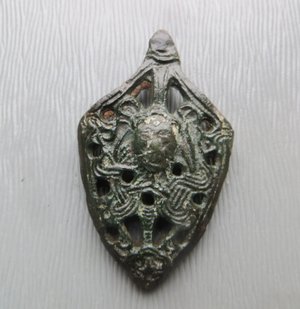 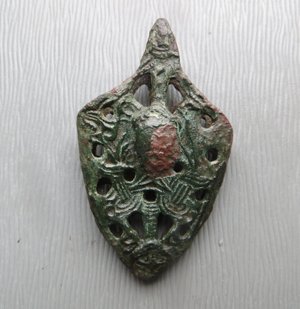 The sword chape above is one of a rare type, in Borre Style. This sword chape deserved to be addressed more indepth on itself, so keep an eye on forthcoming blogs..

Adressed in the mentioned article, there were - at that time - only 5 examples of this type belonging to the so called 'Sub-group B'. Without stating that my example making that 6, it is clear this is a very rare type indeed. To be continued..

Viking sword chapes and their distribution

Locations of sword chape finds are spread over  an extensive geographical area from Denmark, to the north of Sweden, going eastwards into nowadays Eastern Europe as far south to the Black Sea. The mystery of this type of artefact lies within the fact, that some of the types - as the anthropomorphic figure types - were found in settlements, rather than in graves. Why were they seperated (accidentally or deliberately ?) from their swords ? Was their function a cufflink alike ? Worn at the sword adornment on special occasions ? A special occasion whereby it had its function as a horse pendant alike, impressing other people and making oneself distinctive from the other (people) ?

In the majority of cases - that why the provenance and the circumstances how an artfact was being excavated or found by chance are so important for our knowledge - this is not certain. 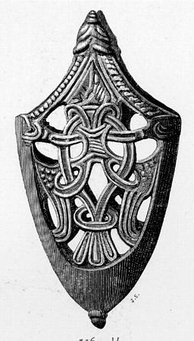 The second viking sword chape - wich also be addressed in a future blog - is of a type called the 'Valleberga type' by Peter Paulsen called 'A Scandinavian group'. Wich adresses a problem in our up to date knowledge and overall present view on viking sword chapes. Being published already in 1953, our knowledge and interpretation since then had increased of course, and a new publication with an up to date overall summary is very much needed.

As Fedir Androshchuk published all 832 (!) known Scandinavian swords in Viking swords: Swords and social aspects of weaponry in Viking Age societies, I would recommend scholars to publish a sortalike publication on Viking Age sword chapes indeed. 832 known vikings swords alone in Scandinavia addresses the rarity of sword chapes regarding their far lesser known number in my opinion.

Though, I am curious what Charlotte Hedenstierna-Jonson has to say about this and will add it to this article when I receive a reply from her.

Described here as 'scabbard chapes' some of the finds within Scandinavia are adressed in his book, but besides the very worthfull publications of Charlotte Hedenstierna-Jonson and the Peter Paulsen's book, no more up to date information I cannot share with you yet.

See for the publications Of Charlotte Hedenstierna-Jonson:

A group of Viking Age sword chapes reflecting the political geography of the time. Journal of Nordic Archaeological Science, 13, pp. 103-112 (2002) as well as

Rus', Varangians and Birka Warriors from the same author adressing the eastern connection and showing us several images of viking sword chapes.

Diverse Russian books like Scandinavian Antiquities of Southern Rus, from Fedrir Androshchuk and Volodymyr Zotsenko (2012) are addressing viking sword chapes, but a course of Russian is sorely needed then ;)

It would lead too far summing up all books where known or less known sword chapes are being published within, but if you know a reference to a book/publication not addressed here, let me know at vikingsandartefacts@yahoo.com.

Link to prior blog April 24th