The viking bracelet - as a rites of passage ?

In this week's - short -  blog about a Viking Age bracelet.

Just being 63.81 mm of width, this wired bracelet was addressed by Brett Hammond from Timeline Originals as indicating it was worn on the wrist of a female.

In my opinion it could well have been functioning as an 'first-time user' example. Could Viking Age boys, when entering adolescent age, receive such a small bracelt as a 'rites of passage' alike moment ?

Then, they would be considered as a man, looking after their beloved ones, when the man was out on the fields ploughing or, looting somewhere or searching for new grounds...

But, then.. why always looking from the perspective of the viking man ? Maybe it was used alike towards girls, when they entered an age they were to be considered a woman.

However it is, children in the Viking Age were considered as of much as value as the adults. They were the eyes and ears in the neigbourhood from the adults. Not much time to complain those days about the newest I-phone etc..

The specialy designed for children bracelets, are a token of that appreciation, in my eyes.

The bracelet is made up from pieces of thick silver wire twisted together and tapered at each end. Two terminals have been created using smaller gauge silver wire, this has been wrapped around the ends of the finished bracelet to secure the strands and to give a detailed spiral finish.

Link to prior blog May 1th 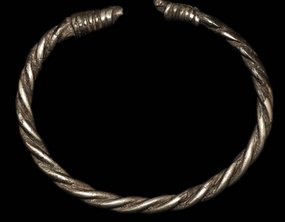