In this guest blog, David Mullaly is giving his view on the Odin mount type, of wich I have one, see image right below - discussed previously on this page I am thankful to him giving his view and hereby share it with you.

In recent years, a very small number of examples of a distinctive bronze mount have emerged from English soil and history which merit our attention. All of them display a triangular human face with large lentoid eyes and a sort of moustache and side whiskers feature. However, the most recognizable aspect of these large mounts is a sort of lattice-looking headpiece at the top. Should this properly be called Scandinavian, or perhaps Anglo-Scandinavian, or perhaps even Hiberno-Norse? More on that later.

An incomplete example of this type is included on the Portable Antiquities site (ID YORYM-5CO4B6), and has been designated as being of “national importance” because of its rarity.  The provided findsite is Brantingham, in Yorkshire. Only a small area of the headpiece remains, but this is clearly an example of this type. 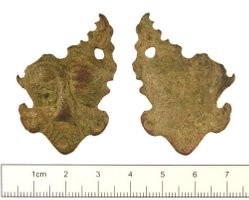 Another example was pictured in the July 1996 issue of The Searcher (p.44). According to the publication, the item “appears to be a mount in the form of a human head. Again of bronze, the style suggests strongly that this is of Scandinavian origin, and would date to the 10th century AD. It could have arrived with a Viking, but may equally be an example of Anglo-Scandinavian metalwork produced in Britain.” No findsite is provided.

An almost identical example is illustrated in the March 2005 issue of The Searcher (p.21). My thanks to Harry Bain and John Winter of the publication for providing a copy of the page. This is part of the description provided: “A cast, copper-alloy, openwork mount, in the form of a hollow backed human face with large eyes, a narrow pointed beard and a projecting moustache. The hair is represented by intertwined snakes.” The findsite provided is Northern Yorkshire. 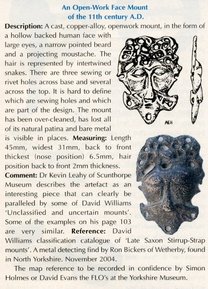 A fourth example, provided by the UK Detector Finds Database (#36202), is described as follows: “An anthropomorphic mount moulded in the form of a stylised human face-mask of late Viking (Urnes style) inspiration. The face has protuberant lentoid eyes, long nose and an elaborate moustache. It is surmounted by a projecting feature or headdress, almost antler-like in appearance, in openwork Urnes style. There are three attachment points: a pierced circular lug on each side and a piercing through the chin, which retains a separate copper-alloy rivet….The mount is possibly a representation of the Norse deity Odin, from whom the mythical antlered Herne is believed to have evolved in old folklore. Its probable use was as a decorative element on leather, such as harness.” The findsite provided is Bedale, once again in Northern Yorkshire.

Finally, yet another example,which was found in the area of Malton, in Northern Yorkshire, is shown below.  Once again, we see the large eyes, the prominent moustache, and the lattice-like headdress. 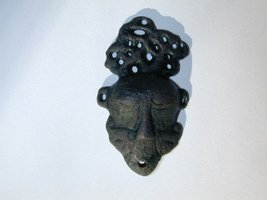 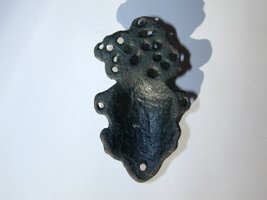 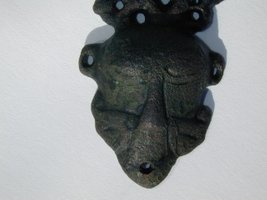 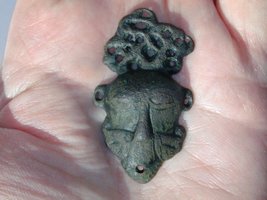 What has been said thus far? We have a small number of large bronze mounts, primarily found in Northern Yorkshire, displaying a strange, staring face with a strange headpiece on the top. One of the descriptions suggests that the style of the headpiece involves the Urnes style, indicating a late Viking dating. And that same description suggests that the face could be that of Odin.

Permit me to suggest that the writer of that description was probably correct about the Odin identification, but probably wrong about the Urnes style and dating. Let me explain.

The common features of the faces on the mount suggest something more than just a Viking visage. When I first saw an example of this type, I immediately guessed that Odin was being represented--but I was guessing. I do not think it’s a guess any more.

Very recently, I saw an ancient bronze mount found in Armagh, Northern Ireland, which had a startling image on it. 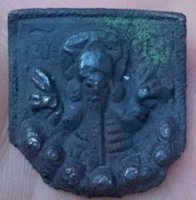 You can clearly see a representation of Odin with a very long beard, with his arms around his two raven companions. This is a familiar Odin image, which can be found on some Viking pendants, which have been found from Western Russia to the UK.  Here is an example. 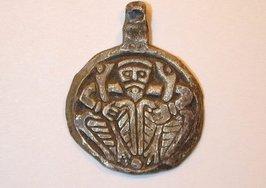 However, if you look at the Odin found in Northern Ireland, you also see what would best be described as a Christian-like halo above his head. It would appear that a Viking metalworker in Ireland borrowed an element of Christian iconography to emphasize the spiritual dimension of the Norse god Odin.

Now, let us consider what has been found in the UK, and primarily in Yorkshire. There are currently six known examples of a mount which may portray a Norse deity, and which include a headdress which could certainly be analogous to a halo.

What I would suggest is that these large bronze mounts, either belt mounts or horse harness mounts, were in fact either made in Ireland by the Hiberno-Norse, many of whom moved from Ireland to Yorkshire in the early 10th century, or were more likely made by those same Hiberno-Norse after they moved to Yorkshire. Instead of being influenced by the Urnes style, and being late Viking, these mounts represent a borrowing from Irish Christianity, and probably made by a number of different metalworkers in the early to mid-10th century.