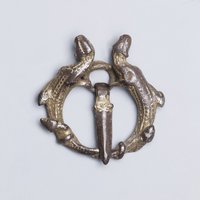 A very unusual, silver-gilt, Norman, annular brooch. The ring is formed as a pair of lizards or wyverns with their tails wrapped around the shanks, and with their heads raised. The pin to the centre resembles a sword.

Provenance: Formerly the property of Lord McAlpine, acquired from M Braham in the 1980s.
Condition: Very fine, with some signs of ageing on the surface.

During the Medieval period, the wearing of brooch was very fashionable, with the buckle pinned at the neck as a fastener. Brooches of annular form were used by both men and women from the 12th century onwards, and became extremely popular during the 13th and 14th centuries. Usually they were made of bronze or silver, and in some cases in gold. This brooch displays the fine Norman Romanesque work of this period: Norman visual art shares features similar to those of the cultures they conquered, as is seen in metalwork, stonework, and religious artefacts.

Romanesque art began to appear in Europe around 1000 AD, not giving way to the Gothic style until the 12th – 14th century (though this depends on the region). The styles and techniques used in the Romanesque period are similar to those of the Byzantine Empire. Objects of important practical use, such as signet rings and belt buckles, were turned into fine jewellery, with buckles being made from precious metal and decorated with precious stones and pearls.

The precise symbolic meaning of a lizard differs depending on the culture. In ancient Rome, the lizard was representative of death and rebirth, since it was believed to go into hibernation for the winter, and to reappear again in spring.

Despite adopting the Romanesque style, animal ornamentation remained a strong theme of Norman metalwork, reflecting their Viking pagan past. Ultimately though, animal ornamentation also reflected Christian symbolism, telling of a world view where man's place in nature was part of a greater unity, created by God. I think this formulation is exactly spot on, addressing why I am also fascinated by this - relatively shortly lived - era where these style of artefacts were made. 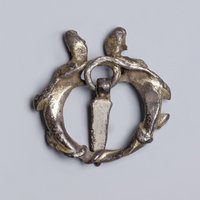 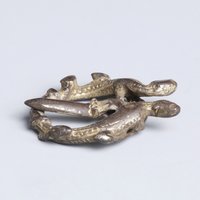 'I suppose, in England, 'Norman' is perceived more as a political, or sometimes chronological, term, rather than a cultural one (though it is more likely to be used by architectural historians). It would be more likely to refer objects of this period by the general term 'medieval', or in other chronological terms (e.g. 12th century)'.

Weighing only 1.89 gram and measuring only 18 mm width and 19 mm length one might wonder how and where it was worn, in all its fragility and seemingly limited possibility holding (on) a dress part.