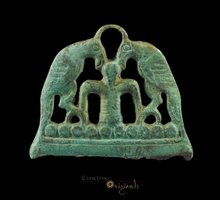 A cast copper-alloy firesteel with iron striking surface below, bifacial with identical design to each face. The openwork handle is formed as a baseline of pellets upon which sit two birds of prey with detailed wings and eyes, their heads arched over a bearded male figure shown with his hands extended to the baseline, his broad shoulders emphasised and the bracelets on his wrists carefully modelled. Between the two birds' heads, a narrow band forms the suspension loop. The symbolism of the male between two birds of prey points to the god Oðinn (Odin) who gathered news by sending out two ravens, Huginn and Muninn, each day at dawn and listening to their reports in the evening.

Provenance: from an old English collection, at one day..

Sergeij Upstad mailed me mailed me more than uptight, making me out for somewhat of a fool..

'... firesteels (steel is a key word here) were all made out of iron of high carbon content during the entire history of mankind. The bronze and other copper alloys are not strong enough to serve the purpose. What you have is a decorative anthropomorphic (combining elements of a man and animals or birds simultaneously) pendant or a plaque of Perm (Finno-Ugric tribes) animal style. Such decor pendants, plaques, clasps and belt ends served as amulets against evil spirits in medieval times..'

And indeed, as one searchs for 'Perm animal style' images, one stumbles upon an image (on the left beneath) wich depicts a similar artefact..

A similar amulet / plaque is to be seen in the book:

So clearly being addressed to the X-XIth century, this is an artefact from the same period as the Viking Age, with a Odin and his ravens alike image but it might be some image known in Finno-Ugrian shamanism or a depiction of the ressurrection of Christ (or: soul flight). It is the question if the image of Odin and his two ravens destines from Viking mythology. Probably this cult/history originates in a much earlier stadium of Indo European culture. The figure of Odin is very much alike a shaman in Finno Ugrian mytholgie who communicates with his two birds between the world above and the underworld. Very well possible that the Vikings took over this image in a much earlier stageout of Finnic mythology and this image already was made in Finnic bronscasting excisted in the period of time before the Vikings. The two images on the right are from a book (very limited printed) called "Ugrian heritage".)

After years, someone revealed to me what the imagery of a person with two birds might represent. Birds: …’it's Mari origin. Thus it has something to do with the Mari mythology. It could be their God named Kugo-Yumo and the 2 birds are him and his brother Yin meaning they created the Universe turning into two drakes, or the birds are 2 giant eagles named Kuchkij like Turul in the Hungarian (Ugric) mythology’.

I asked myself a simple question: isn’t it time I ‘de-vikingize’ a bit and widen my knowledge beyond that of the Norse? I found that it is a lack of knowledge (and interest at first) about styles and mythology within the Finno-Ugric (language) area wich leads tot his (deliberate?) errors made in descriptions on this objects, seen from a ‘northern view’ or a ‘west European view’. I find it very hard to belief that who is interested in mythology, wouldn’t be interested in other area’s mythology. Studying this, we even have a possibility – as mentioned in the quote above – of an depiction showing either the one or the other. Once again: a human with two birds isn’t always Odin. A man with a beard depicted isn’t always Odin. By what means could we be 100% sure a depiction is Odin, by the way. Examples on artefacts are rare. We should embrace and appreciate an object on the atractiveness of its imagery to us, in the first place, not “flowering” it up with a mythological scene wich suits us best. Things can be totally different and most of all we will never know for 100% sure within this Norse or Finno-Ugric imagery. But we must broaden our view tot the unknown. I think it is our main goal in life.

Getting to know the full meaning of imagery can be problematic, ages after, but looking at an object wich is clearly depicting imagery with a purpose, we must give our best effort. Not only the artefact deserves it, its origin and meaning in its culture of origin deserves it.

It is the responsibility of any seller or dealer in artefacts, as it is crucial to its provenance, it is the responsibility of anyone interested looking at these kind of objects and who are at the turn of making a decision of aquiring an item. Care about the provenance of an item. It is the past, present and maybe most important, future, of any object, being hold privately and temporarely in our hand, or professional, within musea, visible or invisible tot he audience (in depots). If one doesn’t get engaged to these crucial aspects towards selling, collecting or – at one point – handing it over to another collector or museum, objects lose their true value.

Infatuated as many might be by Norse mythology and the vikings now – without ever knowing how this will be in future – we must be and stay concious to present and historical information connected to styles, imagery and so on. If we fail to do so, the objects will get disconnected from their origin and history. A history wich needs tob e preserved by all means. At least, we must die trying so. 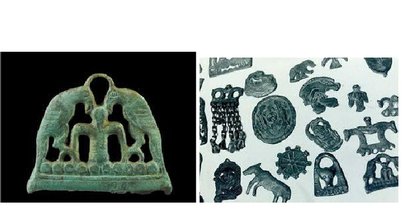 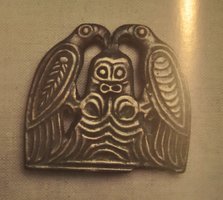 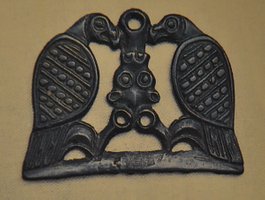 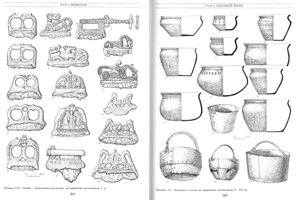 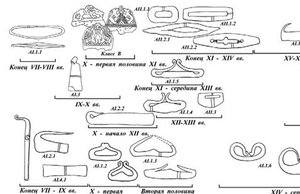